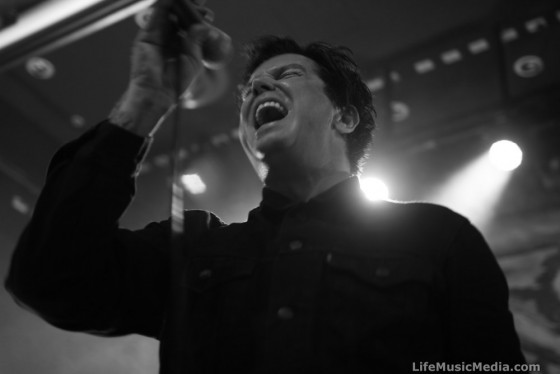 Noting a strange sense of deja vu, Mixtape For The Drive are back for another supporting slot, albeit on a slightly confined stage. What they lack in stage size, they make up for with catchy pop-punk tunes that have, in the past, been likened to genre heroes, Blink-182.

The jumps and kicks have been toned down tonight, but that doesn’t stop the band tearing through a set that demonstrates just how far their sound and style development has come since seeing them almost exactly a year ago.

For most punters, Elva was the album that sound-tracked their youth – a chaotic mix of the hard hitting tunes of old, with some reggae style, acoustic tracks blended throughout. While the band have stepped towards a more accessible rock sound of late, it doesn’t stretch far from where the band came from, offering a glimpse into the transformation of the band over the years and the risks they’ve taken with their sound.

While the first hour of the set smashes out track-after-track of anthems, what’s most noticeable is the enthusiasm of the band and fans to still connect to the songs, 15 years later – undoubtedly showing the longevity of not only this album, but the band as a whole.

A second set consisting of Teenage Suicide, Cailin, Superman and a cover of Grinspoon‘s More Than You Are pretty much ensure the crowd has gone ape shit by this stage, the room heaving and dripping in euphoria and sweat.

It’s hard to predict how a set, largely consisting of one album, is going to pay off – but being that the crowd never stops moshing, never stops singing and pretty much never stops moving – it’s fair to say the Californian natives that Australia loves so much, nailed the shit out of this show.