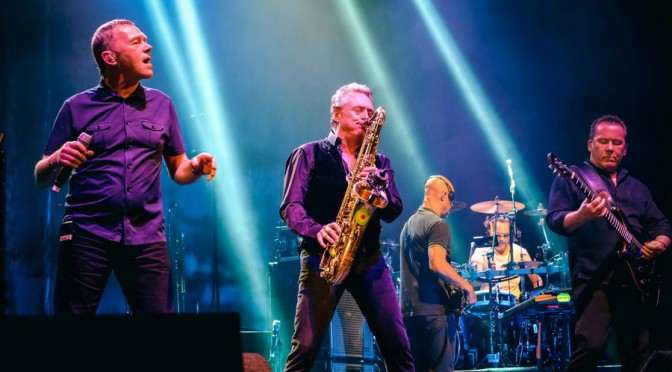 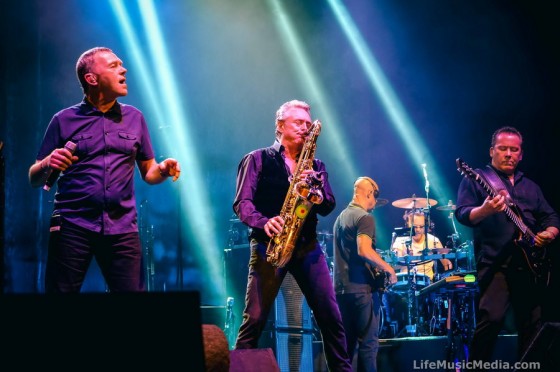 From the time Brian Travers hit a note on his saxophone until the time the band walked off the stage, there was love, positivity and good vibes in the room; welcome to a UB40 concert.

Lead by singer Duncan Campbell with brother Robin on guitar and fronting a 9 piece complete with full horn section and percussion, the “Campbell’s” interacted with the audience having them on their feet from the first song. The band clicked instantly as they worked through a catalogue of hits and memories from their almost 40 years in the business. Hitting the crowd hard with hits and vibes, the band introduced the Al Green classic “Here I Am (Come and Take Me)” a song which showcased the impressive horn section early in the set.

The audience ages drew particular interest from the 70 plus year old in front dancing the night away singing and smiling, to the teenagers joining in with the band down in the front of the theatre. The hits kept coming with “Homely Girl”, “One in Ten”, “Cherry Oh Baby” and the Neil Diamond written “Red Red Wine”, all delivered with a crystal clear sound that showcased both Campbell brothers’ vocal abilities as well as other band members. The band introduced the audience to their reggae sampled versions of the Allman Brothers classic; “Midnight Rider” and the Willie Nelson hit “Blue Eyes Crying In The Rain”, both were very well received. Winding down with the hit “Kingston Town” the band ended the night with the Elvis smash “Can’t Help Falling in Love”.

Just like the missing band members, there were some notable omissions in the song list “Rat in Mi Kitchen” and the 80’s remake of the Sonny and Cher hit “I Got You Babe” came to mind. For me it was an evening of rhythm, love and happiness, this was evident by the smile on everyone’s faces both during and after the show. Sadly today in the world we live in you may have to go to a UB40 concert to experience such emotions, thoroughly enjoyed.