To say I was buzzing with excitement as I took my seat in Sydney’s Qantas Credit Union Arena waiting for Thirty Seconds To Mars is an understatement. Looking around the room, it was filling up nicely. The atmosphere was building and as London band the White Lies stepped onto the stage the room erupted ready to party with them.

The 5-piece band captivated with their raw, edgy sound and successfully pumped up the energy of the crowd in readiness for the headline act.

In the short break between bands the volume of conversation rose to match the built up atmosphere, and then…

The house lights went down, the audience screamed with delight, the stage lights went up and Sydney Qantas Credit Union Arena was filled with the sound of Thirty Seconds To Mars. The voice of Jared Leto through the sound system was captivating as every pair of eyes were studying the stage for a sign of movement with “Night of the Hunter” beginning. Leto came bounding onto the stage with vibrant energy.

The light show was simply beautiful and diverse throughout each song. The use of colours, lines and even the geometric shapes that formed across the stage in the smoky landscape cut out across the audience in a simply stunning display.

It was a pleasant surprise to see the drums (Shannon Leto) positioned in a non-stereotypical position off to the right of the stage, perfectly lined up with both Jared and Tomo Miličević.

Leto instigated the “This is War” chant from the audience rattling the rafters, and the impeccable timing of the band dropping in with the music made it feel simply magical and empowering . During this song massive colourful balloons were released into the audience, followed by “Conquistador” where cannons shot a shower of confetti over the audience. Leto appeared to be having a lot of fun popping the over sized balloons with his guitar as he danced around the stage.

For a performer who has reached such a high point of celebrity stardom, it was refreshing to see how humble he remains. Requesting house lights up to see his audience, his attention was caught by a black and bright yellow sign that said “drumstick for a blind guy”. Jared not only got Shannon’s drum stick but brought Brendan up on stage.

He followed this moment with a performance of “Do or Die”, featuring the lyric “I will never forget this moment”, which really resounded not only for the young man on stage but for each and every audience member experiencing this enchanting show.

Throughout “City of Angels” Leto was sporting an Aussie flag as the sold out entertainment centre crowd were belting the lyrics back to him. For the “End of All Days” Leto asked the audience to turn their phone torches on and it augmented the magical atmosphere.

Once again, Leto requested the houselights up to see the audience and in this moment he stated “I see every one of you in this room tonight” and then, with guitar in hand Leto performed a completely acoustic rendition of “Hurricane”. It sounded remarkable. The beauty of live performance is how an artist can mix up and change up tracks and make you feel like you’ve really had the chance to witness something special. And something special is exactly what we got!

Following a few moments break, they outdid themselves when out they came in animal onesies. It was unexpected and the crowd ate it up. “Bright Lights” was the first of two encore songs executed in spectacular fashion with Leto singing Acapella. The mix was perfect as Leto hit every note to perfection and filled the room with his booming and striking voice.

The final song of the night “Up in the Air” was performed after a large number of audience members were brought to the stage by Jared and it was clearly another audience favourite.

Thirty Seconds To Mars deliver a show that will blow you away mentally, emotionally and visually. If you ever get the chance to see them live, don’t miss out. 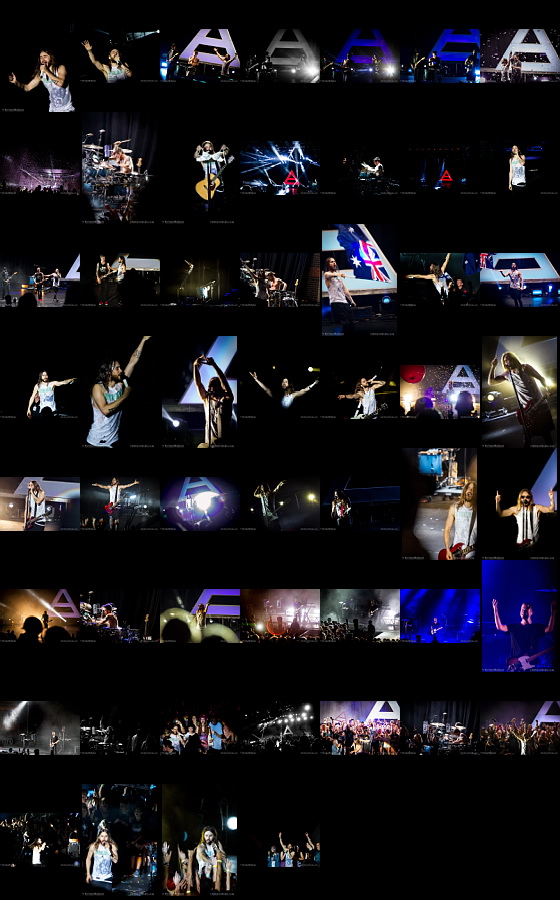