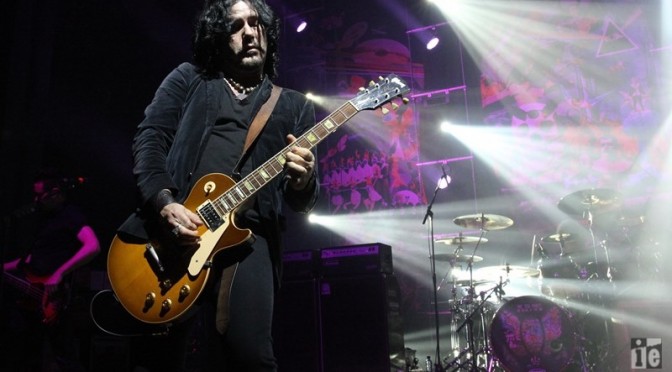 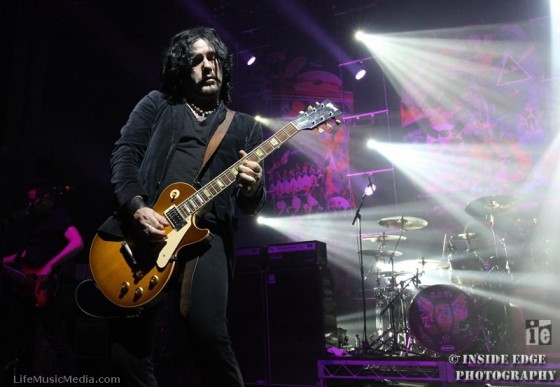 The Tea Party set kicks off with a new album (“The Ocean at The End” ) sandwich of The L.O.C. and The Black Sea (with a filling of perennial favourite The Bazaar) highlighting just how crunchy the new offering is. Gone is the flowery bloat and overly-earnest emotive slather which marred the late-career albums, in its stead a return to the screeching wail of a well-throttled Les Paul backed by a thumping backline.

Frontman Jeff Martin maintains his rock-god Eastern shtick, which takes some time to suspend disbelief enough to understand it’s not a caricature or pastiche. If nothing, he ticks all the right boxes of being a true-to-life rock god – the ability to wring a lick to within an inch of its life, a tremendous ear for a melody and a literary bent to his lyrics (not to mention a swagger of monumental proportions, a darkly mysterious face and an ovary-melting croon. Bastard). The pomp is perfectly placed for a well-trodden take on 1997’s Psychopomp.

Stealing your attention across the stage and the collective worth of the group confirms the whole is the sum of its parts. Drummer Jeff Burrows stumbles little, despite suffering from a terminal case of “just one more cymbal” syndrome. Stuart Chatwood is a study in multi-instrumentalism, with Fire In The Head and others seeing him hold down a bassline while simultaneously kicking in some synth highlights with an array of pedals at his feet.

The hall’s PA is stretched to capacity as the new album formalities give way to the back-catalogue.
The effort, though, feels somewhat rushed as crowd favourites Save Me, Temptation and Transmission are segued together in a string of medleys. To a purist this would leave the listener wanting: instead of hearing snippets of their favourite tunes strung together with drum fills or guitar licks, they would probably rather hear the entire tune.

Still, a Tea Party gig is a known element and one which consistently delivers. As long as they keep churning out the albums to find an excuse to play live, the world is a better place for it.