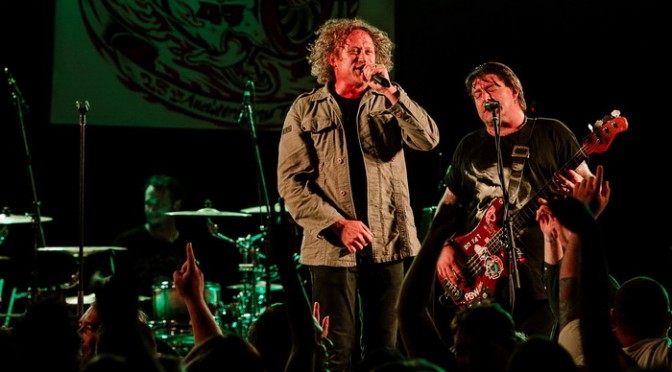 Loud, aggressive and proud from the time they hit the Wyong stage on Friday night. If you didn’t know The Screaming Jets were in town, get your hearing checked. The band consisting of originals Dave Gleeson and Paul Woseen who were joined by long-time members Jimi Hocking, Mickl Sayers and Scott Kingman, took to the stage blasting out four songs including the opener “Dream on” before lead singer Dave Gleeson drew breath. “It’s been 25 f#%king years, who would have believed we would make it”. The set turned into a best off collection including originals and covers. “C’mon” followed by the Woseen penned “helping hand” lead nicely into the Barry McGuire classic “Eve of destruction” (written by P.F. Sloan). Throughout the night each band member highlighted their craft, added to by Gleeson also picking up the acoustic guitar.

The 21 set list concluded with an encore. Woseen played an acoustic original “Friend of mine” that quietly blows the audience away. The guys finished the night with “F.R.C.” followed by “Ain’t no fun”. The band sounds tight and they are obviously enjoying themselves. Bring on the 50th anniversary!