While no one was expecting a dud show (unless Jack White had broken all four limbs he’d still be worth watching), it felt impossible to set a level of expectation on the impending set. The only thing that could be assured is that with the combination of talent on stage, it would at least be memorable.

The Dead Weather loped onstage and straight into the opener of their debut Horehound – ’60 Feet Tall’, a perfect slow burner. Between guitarist Dean Fertita’s almost absent-minded riff and singer Allison Mosshart’s prowling vocals, it was obvious there was power at the front of the room that couldn’t be contained for much longer. By the time the song was in full flight, complete with the beginnings of a fantastic light show, the trepidation of the audience had been well and truly blown away. The growl from Mosshart on tracks like ‘Hang You From the Heavens’ was astounding – as she threw her tiny frame around the stage trying to keep up with the scorching howl of Fertita’s very capable work and Jack Lawrence’s rock-solid basslines. But if there was ever any doubt that it was the Jack White show it was quickly removed. By mid-set the power and skill behind the drums of the man better known for his guitar was readily apparent – and while he did his best for the majority of the set to keep the spotlight focused on the group as a whole, it was a foregone conclusion that attention would eventually need to be focused squarely on White. His first venture to the front of the stage brought riotous applause, which was followed by awed silence as he destroyed the idea that the band had ever had anyone else playing guitar with blistering blues solos. ‘Bone House’ with Mosshart was stunning – with sexual tension you could cut with a knife as they shared the microphone in between White’s solos. The sheer talent of White is a miracle of modern music – as is the fact that he appears to bear his gifts with humility.

‘Treat Me Like Your Mother’ almost tore the Tivoli apart – in fact the entire set gave the feeling that the building had been crafted around the stage with the sole purpose of keeping the audience from being thrown away from this amazing sound. Tracks from their forthcoming album indicate the magic is still very much alive with these four. Supergroups may not have the sheer against-the-odds quality that other talented bands may possess, but they make up for this random quality by allowing their collective talent to drive their ambition. Outstanding!

– Buy: The Dead Weather from iTunes 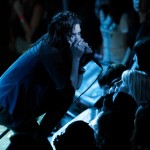