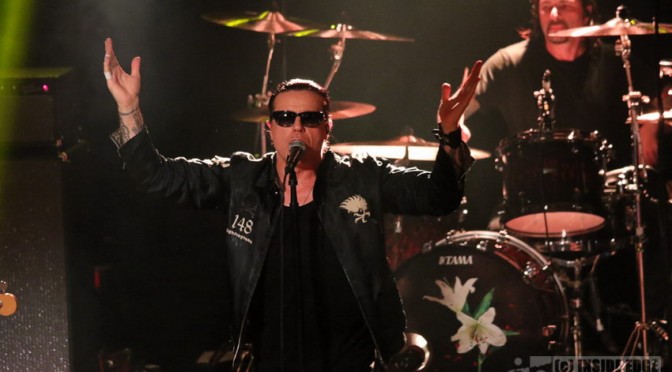 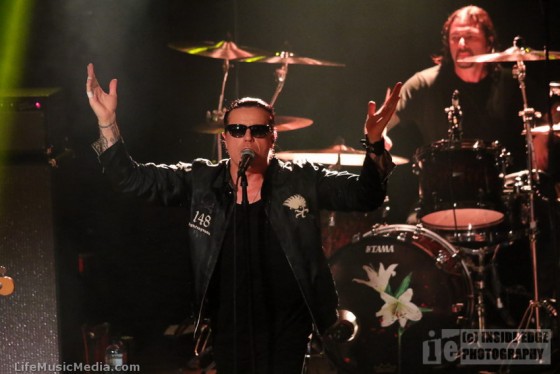 The Art turn out to be a great option for The Cult tour, offering a punchy set of big solid indie rock driven by Kara Jayne on bass and the monstrous Jordan McDonald on the drums, differentiated from the pack by the contrasting lead vocals of Azaria Byrne and Kara Jayne which add to the tonal depth of the songs. Max Warne delivers in the spirit of young and reckless guitar-slingers, and we get some glorious echoes of Marc Bolan from the front man. The Art have just released their new album, “All In The Mind”, and they were the ideal support act and well received by the Brisbane crowd who were pretty happy to get a solid dose of The Art.

Bang on time, The Cult, led by the two legendary figures of the UK post-punk goth rock scene of the early 1980’s took to the stage with their new crew of band members, and ran through a set comprising songs from the new “Hidden City” album, produced and co-written by the great Bob Rock, and a liberal sprinkling of well-remembered tracks from the albums from their prime from 1985 to 1990 – “Love”, “Electric” and “Sonic Temple”.

Without much fanfare, they kick into “Wild Flower”, with Ian Astbury looking fit and trim, and Billy Duffy owning his side of the stage with the Gibsons slung just low enough! The set list mixes up the years, with “Rain”, and the elemental “Horse Nation” bracketing “Hinterland” from the new record.

There seemed to be a very limited rapport between band members onstage at the start, which resulted in a slightly flat crowd response to some of the less well-known songs in the first half of the set.

“Lil' Devil” is the first of the real classics, and is relentlessly driven by the Duffy guitar so far up in the mix that it is almost overpowering, and this rolls straight into another slab of guitar in “Honey From a Knife”. More atmospheric and moody are “Gone” and “Rise” before another down-tempo new song, “Birds of Paradise”, which still has that undeniable Cult sound and vibe.

Also from “All In The Mind” is the slightly eastern vibe of “Deeply Ordered Chaos” like The Tea Party channelling Led Zep with an intense discordant guitar riff over the bass & drums, and some spoken word vocals over the soaring solo.

From this point on it is pretty much back to the 80’s, with a tasty little keyboard intro before the driving riff of “Sweet Soul Sister” kicks in, and Duffy’s guitar work throughout the song is spot on, with lots of wailing feedback, and Astbury on his haunches battering the tambourine into submission, and the chorus erupts through the crowd.

Highlight of the night for me was “Fire Woman”, which is simply a great rock song… then with “She sells Sanctuary” as another top notch rendition, with its instantly recognisable riff to close the set proper.

Encores were the new track “G.O.A.T” which must stand for something…and yet another great riff-driven Cult-classic, “Love Removal Machine”, after which Duffy and Astbury appeared genuinely reluctant to leave the stage, delivering heartfelt band introductions and thanks to the now totally won-over crowd.