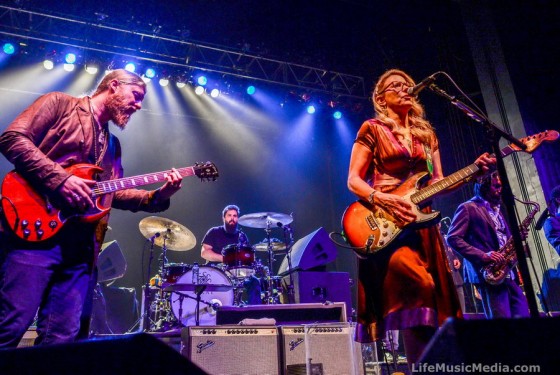 The harbour city welcomed two of the best to the Enmore Theatre on Tuesday night. Husband and wife rock and blues outfit Susan Tedeschi and slide guitar maestro Derek Trucks took to the Enmore stage for a sold out event. It was the first time the band had visited Australia since 2013 and the fans welcomed them back with open arms! Fans were treated with numbers from the bands back catalogue and their new album ‘Let Me Get By’ which was featured throughout the two hour plus set.

Joining the duo on stage were 10 multi-talented musicians. The show is synchronised in a way every band member had their time to shine. The gig was much more than a well-rehearsed concert, it was a showcase of musical talent. Perhaps it would be better defined as a super jam with lots of extra fillings. Each song, be it a cover or an original, left you wanting more. Watching this band from a seat just doesn’t feel right, the music was like a magnet drawing you to get up and dance.

Trucks craftwork on the George Harrison penned classic ‘Something’ was the highlight for many on the night, while others loved the classic ‘Midnight In Harlem’. Tedeschi’s superb guitar skills and gravel enchanting vocals are, you could say, the glue that binds this family together.

For a band that only formed in 2010 and have only visited Australia a few times they have a massive following! No wonder they are a headliner at Byron Bay Bluesfest 2016. If ever there was a time you’d like to relive or wind the clock back, it would be right now.

Bluesfest you are in for one hell of a ride.