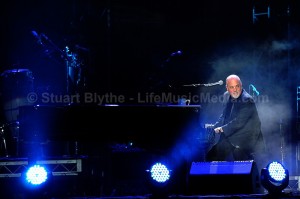 L.A. band, Illumination Road is a duo that was making their worldwide, live debut. The pair had three additional musicians on hand and they played rock music which took its reference points from some of the greats from the golden period in the sixties and seventies. “What We Say” closed the set and had a decent tune and with time these guys look poised to be ones to watch.

It’s a sad day when an artist as talented as Mark Seymour is moved forward on the bill so that he’s playing second fiddle to the likes of Shannon Noll. But that’s precisely what happened to the former frontman of Hunters & Collectors, even if he didn’t make reference to this. He wielded an acoustic guitar and along with his backing group, The Undertow, he played Hunters classics like “When The River Runs Dry” and “Holy Grail”.

Some of Seymour’s newer material fitted into the Australiana category and made him sound not unlike Paul Kelly. “Castlemaine” had a rustic charm and was about a town in South-Western Victoria while “Westgate” was all about Eddy Halsall, the lucky survivor of the Westgate Bridge collapse in 1970. In all, Seymour’s set was a short, sharp one full of folk and rock tunes that sounded like they came from another time and place.

I really don’t understand the appeal of Shannon Noll. He had a few devotees in the audience enjoying his remake of “What About Me” and “hits” like “Lift” and “Shine” but for the most part I was bored. He moved around the stage and off to the sides and I did find myself dreaming of him falling off it because to me, his voice isn’t that strong, he didn’t play any instruments and he’s not that charismatic a frontman.

On the flipside, if there was a bloke you’d just love to share a beer with then Johnny Diesel is your man. The guy knows his way around a guitar and a love song. “Don’t Need Your Love” included some excellent slide guitar-work but it was at the end of his set where he really hit the mark. Classics like “Tip Of My Tongue” and “Cry In Shame” had great, bluesy riffs and showed that he and his band were a soulful lot.

Another musician with lots of soul was Guy Sebastian who had a big band on hand and the musical chops to match. I wouldn’t consider myself a fan but he did deliver on his promise to make some people dance with his radio-friendly tunes, “Don’t Worry Be Happy”, “Get Along” and “Who’s That Girl”. Sebastian also had his fellow reality TV backing singers on hand, Carmen Smith and Angel Tupai (the latter singing with him on the soaring duet, “Armageddon”). And while Sebastian’s other guest, Lupe Fiasco was missing from “Battle Scars” due to a technical mishap; the band still played a pleasant enough rendition and like the rest of the set, it had moments allowing you to groove.

Now if there’s a band that makes me proud to be an Aussie then it’s Icehouse. They had a fantastic animated display and this was particularly evident in “Great Southern Land” where everyone got a little misty-eyed about our wonderful, island home. The group also played a big band version of “We Can Get Together” plus the self-deprecating, “Crazy” and a smouldering take on “Electric Blue”. They also played a stirring cover of T-Rex’s “Get It On”.

The hairs stood up on my arm during “Hey Little Girl” (not sure if it was the driving synth or haunting lyrics) although some people said the same thing about “Man Of Colours” when it was lead by new member, Michael Paynter hitting exceptionally high notes. Frontman, Iva Davies would later swap the electric guitar and join him on the oboe. Davies had previously joked that going back to 1987 and even earlier (they did play their early hit, “Can’t Help Myself”) had felt like an “eternity ago” but it was clear that now that Icehouse has been refreshed with lots of young blood, it had helped Davies re-invigorate the old songs with a feeling of fresh cool. Brilliant.

Another legendary songwriter in fine form this evening was the headliner, Billy Joel. The piano man was greeted by a sea of camera-phones for “Miami 2017 (Seen The Lights Go Out On Broadway)”. He played a magical set and a full concert that boasted so many hits. During his first big single, “Piano Man” the stadium erupted into a huge sing-along and then there were songs written about exes one and two including “She’s Only A Woman To Me”.

Joel’s band did an excellent job of seamlessly translating the records into the live environment. This meant you could close your eyes and convince yourself you were listening to a pristine copy of the vinyl album. Joel was unimpressed with the start of “Streetlife Serenader” so he made them all start it again, proving that they weren’t taped and could be spontaneous if the moment called for it.

Two rather unexpected moments did materialise when the band started playing “Born To Be Wild” where Joel started dancing at his piano. But it was “Highway To Hell” that was sweet like wine for this Sydney crowd. And it wasn’t just because Jon Stevens came out to sing a little bit but also to watch the enthusiasm that was so obvious you could taste it from guitar tech, Ricky ‘Chainsaw’ LaPointe.

It’s hard to pick a highlight from Joel’s set. But he did prove a consummate professional just like his old mate Elton John and happily obliged us with singles like “You May Be Right”, “It’s Only Rock & Roll To Me”, “Only The Good Die Young”, “Movin’ Out (Anthony’s Song)”, “My Life” and “River Of Dreams”. Joel sounded as good as a choirboy, made cracks about looking like his father and in “We Didn’t Start The Fire” didn’t falter with the 50 million lyrics and ultimately produced something that was positively euphoric and spine-chilling. My one complaint was that “Uptown Girl” didn’t make the cut, but that’s just being petty. It had ultimately been an outstanding night and a perfect way to top off a most entertaining weekend.