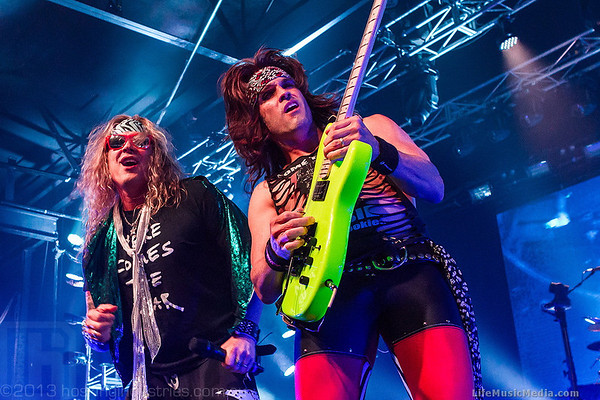 Steel Panther have graced Australian shores numerous times over the last handful of years, each time moving to larger and larger stages around the country. However, when we first heard about the mock-hair metal band’s move to Sydney’s Hordern Pavilion for their ‘Spread the Disease’ tour, we thought it might have been a little optimistic.

But arriving just in time to see first support act Fozzy take to the large Hordern stage, fronted by WWE wrestler Chris Jericho, with a line of people waiting to get into the venue that seemed to stretch on forever, it was obvious that filling the big shed would prove no problem tonight. With their southern-tinged brand of high energy rock ‘n’ metal, Fozzy easily whips the early punters into a frenzy of sweaty bodies despite the venue being half empty.

Former Stuck Mojo guitarist Rich Ward exudes a frenetic southern rock vibe, dancing around the stage in flared pants and looking like he doesn’t have a care in the world. Mr Chris ‘Charisma’ Jericho runs from one side of the roomy stage to the other, fist-pumping and riling up the crowd like he’s still in the wrestling ring and against the chants of FO-ZZY, FO-ZZY, the band concludes what is their second visit to Sydney within 12 months to rapturous applause. If you missed tonight’s performance, you can catch them at the Manning Bar on December 14.

Buckcherry are up next, complete with enough sexual language and visual cues to go punch for punch with headliners Steel Panther – but in altogether more serious and adult way. While one could imagine the guys from the Panther taking off their make up at the end of a set and going home to wives and kids, it’s equally easy to imagine the dudes – including sinewy frontman Josh Todd – stepping off stage and into a groupie or three.

The band continues tonight’s trend of excellent stage craft and presence, with each member bringing their own unique style of charisma to the performance that includes plenty of big hooks and catchy choruses. While it’s the band’s biggest hits like ‘Lit Up’ and ‘Crazy Bitch’ that draw the loudest reaction, the crowd has no trouble singing along to most of the impressive set.

While the two supports were drenched in little more than red stage lighting, the moment Steel Panther run onstage it’s like a whole other world. Rows of light cans, multi-level staging and 6ft drum riser backing onto a massive LED screen helps bring the 1980s to life and the crowd immediately loses is shit.

While there’s no doubting that Steel Panther is musical theatre, as opposed to a real band, tonight’s performance is nothing but entertaining, with extended sections of rehearsed dialogue, pre-recorded video skits and all the cheeseballs ’80s stage poses creating a truly wonderful escape for all those willing to believe. And they don’t break character even for a second.

Despite the completely un-PC nature of Steel Panther and their music, we’re surprised to see such a high percentage of women in the audience, lapping up every dirty joke just as happily as the guys (who, by the way, are wearing just as much Spandex as the ladies). As offensive as the women’s liberation league might find the lyrics, it’s all in good fun and Steel Panther dish it up in spades.

One thing certainly not lacking tonight is talent. Even though the band specialise in paying homage/mocking the 1980s hair metal scene, they’re all great at what they do and they wouldn’t have made it to album three if the songs didn’t have strong hooks. From the opening notes of ‘Eyes of a Panther’ and classics like ‘Asian Hooker’ and ‘Turn out the Lights’, to the LOL-inducing ‘Eatin’ Ain’t Cheatin’ and ‘Community Property’, Steel Panther proves over and over that they’ve got the chops to back up the humour.

Tonight sees numerous boobs flashed from the crowd, girls making out and even one random dude being lifted onto his mate’s shoulders… pants-less! We kid you not.

From the stage set and lighting, to the tunes, to the outfits and posing, the 1980s come back to life with incredible detail. And while it’s material from the first album that goes over best, clearly no one is going home unhappy, with endless crowd participation, crowd surfing and big smiles all around.

Death to all but metal!