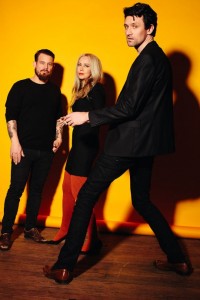 A varied crowd aging from early twenties to people old enough to be parents of the band themselves congregate at the Unibar in Wollongong to see Something for Kate (SFK), a town SFK haven’t visited since 2009. This kind of group creates a lovely atmosphere at a gig, people of many ages and backgrounds coming together to enjoy music from a band that have been consistently impressive for twenty years. There is not a doubtful mind in the room, SFK are sure to impress once again on this chilly May night.

First up is Melbourne lady-rocker Courtney Barnett. Nobody is complaining about the trend of female singer songwriters coming out of Australia at the moment, and Barnett can be added to the list of up-and-comers if she isn’t already. With a powerhouse vocal ability and songwriting skills she blew away the audience that had arrived early. Highlight was her latest single Avant Gardener, which she explained was about the time she was gardening and ended up in hospital and includes funny lyrics like “the neighbours must think we run a meth lab”. Barnett is a great addition to the SFK tour.

The six year break was tough for fans, but Something for Kate have come back better than ever with their latest album “Leave Your Soul to Science” and we are treated to quite a few tracks from this including Survival Expert, Star-Crossed Citizens, Private Rain, and a lovely performance of The Fireball At The End of Everything.

Differing from their last tour, where SFK previewed their latest album, tonight our ears were treated to a much wider range of songs from their back catalogue with their debut album “Elsewhere in 8 Minutes” (1997) even getting a look in, much to the delight of older fans in the room. This included set opener Captain (Million Miles An Hour) and personal favourite Anarchitect.

Dempsey had banter with the crowd throughout the whole set, at times attempting to explain what song was about to be played, or just speak, however the rowdy Wollongongian’s (as Dempsey calls us), wouldn’t let him get a word in, so he proceeded to just play songs and this seemed to be to no-ones disappointment. However I would have liked if he hadn’t been cut off every time, and actually heard what he had to say.

From their fifth album “Desert Lights” (2006) only one track was played, Cigarettes and Suitcases, a set highlight in my eyes. Another highlight was Dempsey’s and touring pianist/guitarist/vocalist John Hedigan’s beautiful acoustic performance of Light at the End of the Tunnel. Hedigan has only been playing with SFK live for about a year, a short time in comparison to their extensive gig career, however he fits perfectly, giving another layer to Dempsey’s vocals as well as his contribution on guitar and keys.

From then on, the pace picked right up with Twenty Years and Monsters from their third and most successful album “Echolalia” (2001). We got a return to the new tracks with a lovely singalong to The Kids Will Get The Money, dedicated to Gina Reinhardt by Dempsey, and Miracle Cure to finish the set.

The band tweeted early in the day that they had a “last minute special guest” to come on stage with them in Wollongong. This turned out to be Lindsay McDougal (better known as ‘The Doctor’ from Triple J), who joined SFK on stage for Electricity, the first song of their encore. He and Dempsey had a fantastic guitar jam on stage before McDougal made his way off stage and Something for Kate ended their incredible show with Déjà vu, a song deserving of the crowd singalong that came with it and a set definitely deserving of the applause it was awarded.

Tonight’s set was by no means a greatest hits playlist, this was one for the true fans and the true fans were massively content, with ear-to-ear smiles evident in all punters on the way out of the venue. If Something for Kate are still making music in another two decades, I will most definitely be one of those oldies in the crowd at their gig singing along to every song. A fantastic band, great crowd and lovely venue made out for an all-round outstanding show and on behalf of everyone at the gig, I thank Something for Kate for making time to pit stop in Wollongong as part of their Star-Crossed Cities tour.