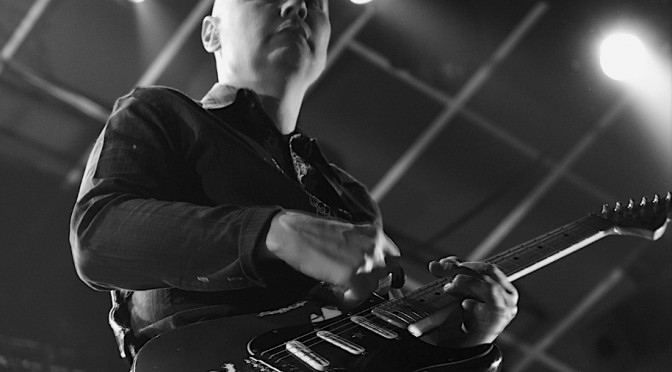 With more energy than a hyperactive child in a candy-store at Christmas, the band launch into a live set that boasts catchy hooks, honest rock and generally speaking, a lot of fun – making the crowd see why the band is such a formidable force in their home country.

Being the bands first time in Australia, it certainly doesn’t appear this will be their last.

Second on the bill is Gerard Way. Having called it quits for the legend that is My Chemical Romance (sniff) in 2013, Way has branched out with his own solo project, and has been building a steady following in its wake.

Comprising of intergalactic pop and glam rock, Way’s sound lies somewhere in the realms of mid-80s David Bowie – an entire world away from the theatrics and angst of My Chemical Romance.

However, tonight’s performance falls a little flat and feels (on the whole) safe – the energy of the band seeming to wain between songs, only occasionally offering moments of excitement. Whether due to the commitments of Soundwave Festival earlier in the week, exhaustion or illness, it was a shame not to see the band at 100% tonight.

Understandably, tonight’s greatest applause seems to be reserved for headliners, the Smashing Pumpkins.

Over 20+ years since the bands inception – and through numerous line-up changes – the band still manage to command an unprecedented level of dedication and support from fans.

Primarily, this seems to be due to enigmatic frontman, Billy Corgan – and his reluctance to give up on one of the most dominate bands of the 90s and the vision he has as an artist.

Certainly, Corgan’s performance has lost none of its potency – each significant growl sending a collective shiver around the room. Perhaps the most glorious moment being during ‘Bullet With Butterfly Wings’, as Corgan practically spits ‘Can you fake it, for just one more show?’ with so much venom, it prompts one nearby punter to say ‘Woah’. Woah, indeed.

As a collective (and a brand new lineup since the last Australian tour in 2012), the band are at their most formidable in recent memory. The most recent inclusion of Mark Stoermer (The Killers) on bass and Brad Wilk (Rage Against the Machine) on drums – makes for an epic live set – with the combined sound pouring down on the crowd in all it’s heavy, melodic glory.

In summary, it’s hard to deny the impact and longevity of the Smashing Pumpkins over the last 20+ years. The bands continued confidence and drive to create an endearing, bold and memorable live set is commendable, and certainly stays with you long after the last chord rings out over the speakers.