Ahh, the annual Soundwave cavalcade. A time for sunburn, aching legs, aching livers and severe tinnitus. For those with average bank accounts, Soundwave is usually a choice between the main festival and the many and varied accompanying ‘Sidewave’ shows.

For some, the choice to purchase tickets to a Sidewave is more about being able to see their favourite bands in a more intimate environment with a few thousand other die-hards instead of tens of thousands. We’re left in no doubt tonight that many of the punters filling Luna Park’s Bog Top in Sydney fall squarely into the third category: those who feel compelled to spend up and see their favourite band/s in both arenas. Tonight’s Sidewave, starring Slayer, Anthrax and Kingdom of Sorrow is truly an exceptional line up of talent for one intimate venue and it comes as no surprise to find a long line of black-clad dudes stretching out past the big open mouth of the amusement park. First up is a band boasting quite the pedigree: Kingdom of Sorrow. Yet, despite featuring Jamey Jasta of Hatebreed and Kirk Windstein of Crowbar and Down, we find ourselves overhearing plenty of questioning conversations and the half-full room, while appreciative of the excellent performance, isn’t exactly able to sing along. This is a criminally underrated band.

Blasting out an impressive set of songs from both the band’s albums, Jasta bounces around the stage in his usual manner and Windstein bruises the microphone with his baritone gravel. It’s heartening to see musicians of this level lugging their own gear in what seems more like a bunch of mates having a good time than an international act winning new Sydney fans.

Anthrax‘s Scott Ian got it right when he proclaimed, “tonight you’ve got the Big 2”. The thrash veterans launched hard out of the gate with a set list spanning their entire catalogue and didn’t let up for a moment, like they still had something to prove. They may be two men down, but the performance is tight and strong, with Shadows Fall axeman Jon Donais filling the lead guitar spot like it was made for him and John Dette performing double-duty on drums for Anthrax AND Slayer. That dude must be fit!

With classics like ‘Caught in a Mosh’, ‘Indians’ and a rousing rendition of AC/DC’s ‘TNT’, their set is punctuated by more recent songs like ‘Fight ‘Em ‘Til You Can’t’ and ‘In the End’. Bassist Frank Bello is the band’s Energizer bunny, even outgunning Scott Ian in the stage presence game. Most impressive, however, is singer Joey Belladonna. Despite his chequered history with the band and the less than ideal circumstances in which he rejoined the band for the ‘Worship Music’ album, his energy levels and showmanship are mind blowing; even seemingly reluctant to leave the stage at the end of their amazing set.

Even at half power, thrash titans Slayer are an imposing musical presence. We were half expecting a few fans to shout derogatory slurs at guitarist Kerry King over the recent departure of legendary drummer Dave Lombardo, but they were probably all too scared by the great lump of tattooed flesh menacingly grimacing from the dark stage.

Over the next hour and a half, Slayer punish the eager Sydney crowd that have now completely filled the Big Top. The set list covers iconic thrash hymns from their entire discography – except perhaps ‘Diabolus in Musica’ – as bodies fall over the mosh barrier like driftwood over a waterfall.

While singer Tom Araya may be windmill-free these days and be sporting a larger paunch than years gone by, his voice is like a fine wine; seemingly getting better and better with age. Although, he does seem a little tired during tonight’s performance. Exodus guitarist Gary Holt (who is filling in for Jeff Hanneman) fits Slayer like a glove, covering Jeff’s leads and never missing a note of the oft-complicated Slayer riffage. I wouldn’t be surprised if we saw Gary become a full-time member, should Jeff’s recuperation last much longer.

No matter your album preference, Slayer had you covered tonight. Classics like ‘War Ensemble’, ‘Chemical Warfare’, ‘Mandatory Suicide’, ‘Seasons in the Abyss’ and ‘South of Heaven’ mingled seamlessly with more modern tracks as ‘Bloodline’, ‘Disciple’ and ‘Pay Back’.

Tonight was a night full of master classes in right-hand picking technique for any guitarists in the room. It’s not often you have this many thrash and metal heroes gracing the one stage and by the smiles on everyone’s faces, you can tell they appreciated the effort. 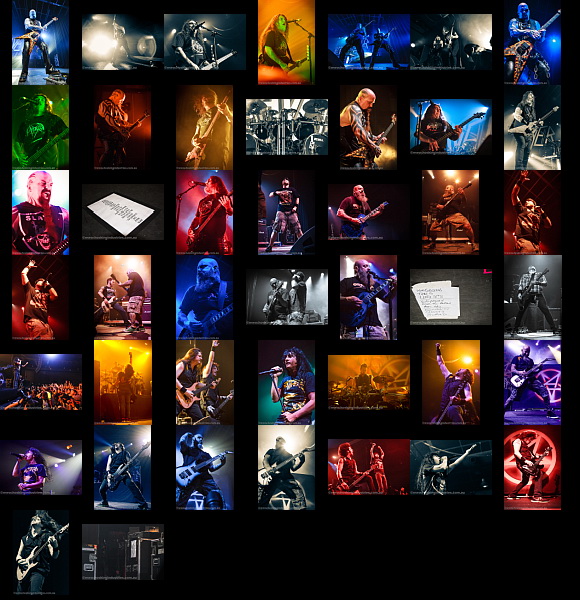