As we all stood and waited for the show to start, the Hordern Pavilion were playing Iron Maiden’s “666 the number of the beast”. I was stoked to hear a venue playing great music that really builds the atmosphere leading into the bands performances.

With a strong intro, kicking off their set with “Pussy Whipped” the crowd was in a frenzy and ready to rock out with STEEL PANTHER. The vocals of Michael Starr captured my attention instantly, they were crisp and every lyric was articulate.

The combination of the dramatic guitar riffs, bass lines and the rumble of the drums were complimented by the costume design of each band member and all together created an unforgettable show.

If you’re easily offended, Steel Panther are not the band for you, for the rest of the population we were laughing and singing along to every song.

Full of sexy lyrics, Steel Panther are not for the faint hearted. They are clever and full of charisma, as a result, they suck you in and you just can’t resist singing along, no matter how potentially inappropriate you deem their lyrics to be.

Satchels guitar solo left the girls swooning, and Lexxi Foxx’s fabulous hair solo had them all jealous. Playing “17 girls” next, Starr grabbed a number of ladies from the audience to join them on stage. In true Aussie form, when it came time for Starr to move them off the stage, he attempted this statement; “Only girls willing to show their tits should stay on stage” all the girls stayed put, but only one gave us a peek.

The lights were down and from the back we could see movement on the stage, the front row let out a roar and it triggered the rest of the audience like a mexican wave… SLASH was on the stage.

The big intro of “You’re a Lie” had the crowd screaming and everyone’s eyes were on the stage. Front man, Myles Kennedy brings style to the night, with his charm particularly shining through in the lyrics of “Nightrain”.

As they moved flawlessly through each song, it was hard not to be sucked into the energy of the band on stage. The crowd were mesmerised through “Ghost” and “Back from Cali”, they all knew the lyrics and were singing them back to a very humble Kennedy.

The man we were all here to see didn’t let us down. Slash moved around the stage with ease while playing his delicate guitar riffs. Every solo, he stood in the centre of the stage and up on a rise, and it was impossible not to get lost in the movements of his hands as his fingers danced across the fret board, making the guitar sing.

The chemistry between Myles and Slash really stood out during “Starlight”. Everyone in the room was hypnotised by the way Slash made playing the guitar look easy, especially during “Anastacia” when he brought out his half acoustic half electric Guild Crossroads Slash double neck guitar. Ending their set with “Sweet Child ‘O Mine”, “Slither” and “Paradise City”, the unmistakable riffs and melody had every member of the crowd singing back to the members on stage 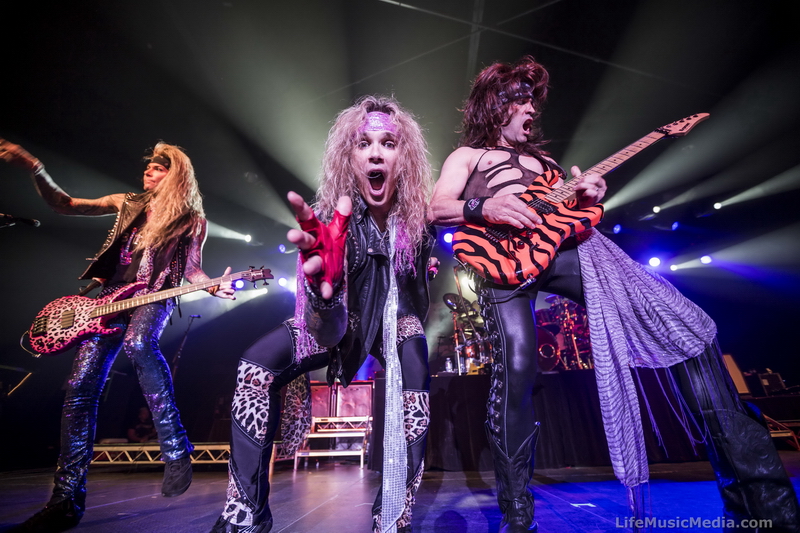