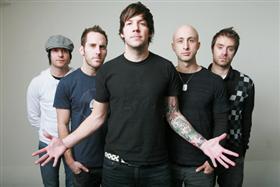 Simple Plan are well loved on Australian shores and for the last decade they have been dominant in the punk-pop scene. Fans young and old were in for a night like no other on Friday June 1st, when thousands of Aussies packed Sydney’s Hordern Pavilion in support of the French-Canadian quintet. I entered the venue as a 20-something year old music lover who once shared quite a strong love for their earlier music, and found myself leaving as my 13 year old self, excited and jittery. The night was a hot-bed of excitement, slightly naughty one-liners and infectious beats.

A quick glance at the line-up and you knew you were in for a night worthy of your funds and time with Simple Plan, We The Kings and local sensation The Never Ever! Teenage girls were practically frothing at the mouth right there! The Never Ever were a pleasant surprise; catchy, dancey and all that jazz. They even looked the part with vibrant clothing and slightly bizarre moves. The audience thriving around energetically enjoying their ‘Paramore’/’Cute is what we aim for sound’.

We the Kings took to the stage amongst mighty roars, flirty cheers and girls pushing their way eagerly to the front of the mosh pit. The Florida based power-pop boys opened with “She takes me high” off their second full-length album “Smile Kid” which was a fantastic opener of their 40 minute set and really demonstrated why they are so hot right now. The boys played songs off all three of their full lengths. Standout moments included when front man, Travis Clark slowed the set down and invited the crowd to sing-a-long with him on their track “Heaven can wait”. For their conclusion Clark encouraged the audience into a chant which resulted in the much anticipating, “Check Yes Juliet”. The opening chords were met with an impressive roar and by the end of it there wasn’t a single person that didn’t want more.

Simple plan were greeted openly and welcomed passionately to the stage by their Aussie fans. It had been a long time since I had last seen them on stage and I was glad to see they hadn’t lost their youthful, cheeky charm. Pierre Bouvier flirtatious and charming as ever, his age-defying voice still full of joie de vivre. The French-Canadian quintet pleased the array of fans, playing an extensive set of songs off all four of their full-length albums. Classic hits “Addicted”, “My Alien” and “God must hate me”; tracks off their first album “No Pads, No Helmets…Just Balls” (2002) which they dedicated to the old school fans; to new tracks off their album “Get your heart on!”

Jet Lag was a huge moment of the night and welcomed Christina Parie (of Australian X-factor fame) on stage to sing the female parts with Pierre. Another great moment was when Pierre asked the audience to hold up their mobile phones to “light the sky like stars”, a modern day lighter, in order to create an ambiance that was very fitting for their current hit “Astronaut”, that excuse the pun was out of this world. For me, my favourite part of the night was when the band pulled off an impressive mash-up cover of hits “Moves Like Jagger” (Maroon 5), Dynamite (Taio Cruz) and Sexy and I know it (LMFAO). It was awesome to hear the boys try something totally different to what you would expect from a Simple Plan concert and I think they definitely pulled it off!

The Simple Plan show at the Hordern Pavillion on Friday night was the first show of an extensive east coast tour that you definitely don’t want to miss!