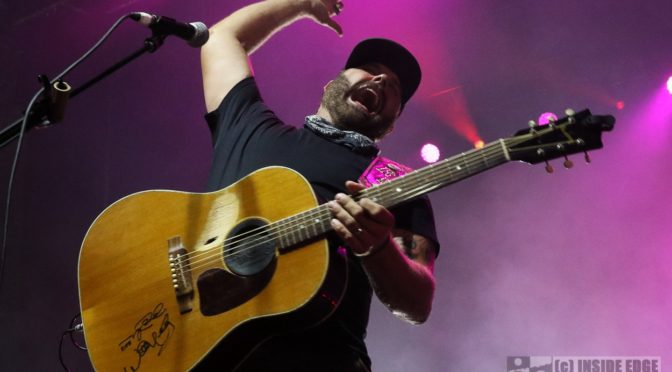 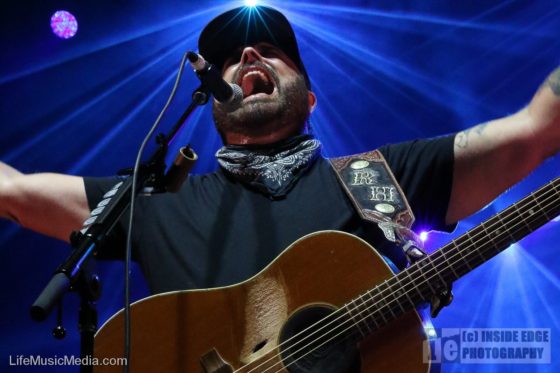 Dallas Davidson is a name that many people will not know, and I reckon a chunk of the crowd who made it in to the Enmore from the storm outside might have thought he was the low-budget warm-up act doing covers of country number ones…..the thing is, Dallas wrote all of these for Luke Bryan, Jake Owen, Bake Shelton, Jason Aldean and Lady Antebellum…..so he really is entitled!

Just Dallas and his big white Gretsch gave us a taste of his songwriting talent, with Play It Again (Luke B), The One That Got Away (Jake O), Hunting, Fishing Lovin’ Every Day (Luke B), Country Girl (Luke B) and Boys Round Here (Blake S) delivering a modern-day country rock soundtrack. Impressive!

Lights out and ZZTop’s I Gotsa Get Paid starts cranking through the PA, and sees Randy Houser and his super-tight band kick the set off to a roar from the Enmore thrashing his acoustic until the melody of We Went rolls on and we are off, with the crowd giving as good as the band from the opening chorus.

Then How Country Feels delivers a thunderous punch, before a new song, High Time from the new Magnolia album, gives the first real taste of the power of Randy’s soaring vocals. Followed by a blues rock monster No Good Place To Cry featuring the blistering lead guitar of the chief axeman giving a fine Stevie Ray Vaughan impression.

Randy straps on the black Les Paul for a raucous Boots On, with some foot stomping string bending fun before ripping into My Kind of Country, with the Hammond organ rolling over the solid kick drum beat.

Randy seems overwhelmed and astonished at the response – “Sydney…..this is so badass!”

A quick change of guitars (we counted 12 guitar changes in all) and the band slams into the first verse of Whistling Dixie, before RH gives a serve to an idiot in crowd without missing a beat – he is bigger, louder and more enthused than expected and the band is so tight.

The Hammond opens up to set the mood, and Randy delivers the first of several heartfelt thank you’s to the Chugg and CMC teams, as well as to the crowd.

An amusing story leads us in to a new song written by Randy and Dallas, the opening track on Magnolia – called No Stone Unturned, we get the alternate chorus of No Turn Unstoned – which if you were at the show, you will totally understand! All stripped back through the verses until the band winds up with another epic clean solo from the lead guitar.

Piano melody from John Henry brings the crowd to life again, then the beaten up acoustic intro jumps in for Goodnight Kiss, with a huge crowd singalong and some impassioned vocals from Randy.

New single What Whisky Does sees Randy singing over his own blues guitar before the band steps in, bringing a very laid back late night bar-room feel to the show, before the power returns with Randy’s voice just awe inspiring here.

Up goes the tempo for Something your Mama Don’t Know, with some raunchy dirty slide guitar and a jaw dropping guitar battle to end it.

Amber, who had been in the queue since 2.30pm, is asked up on stage, and Dallas Davidson appears as well, and all three of them do an unprompted shoey to wild applause!

Happy Birthday is sung to Schwig the guitar tech, and the set closes with a dedication to Australian cowboys and cowgirls, and a singalong of the beautiful ballad Like a Cowboy. There is an immense power and clarity in Randy’s voice and he just belts this one to the rafters! As he then said…..”This has been one helluva night!”

As the lights dim, there is more noise from the crowd than I have heard before at The Enmore, and Randy comes out solo to play the “not-australian anthem”……Waltzing Matilda, having learned all of the verses, with the crowd roaring along in green and gold lights.

The band re-appears to deliver one final rip snorting effort with Dallas Davidson joining in on guitar and vocals on the classic Running Outta Moonlight.

And then the show is over – this was an absolute belter, and once again demonstrates the increasing draw of country music in Australia, as well as confirming that many of today’s country rock acts have many more dimensions spanning blues, southern rock, folk and pure country music, and as a major plus with this man, an astounding baritone voice that really delivers a punch. 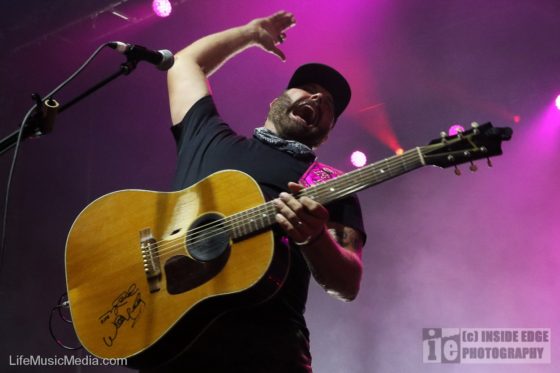