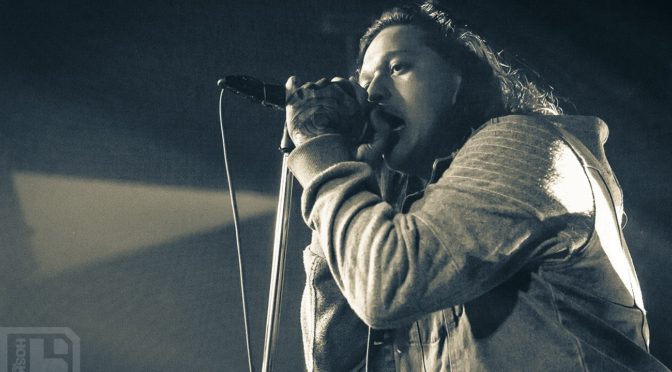 I pity any metal head in the hunter region that missed out on tonight’s show at the Cambridge Hotel. Between the four acts on show, just about any genre-loyal fanatic would have been well catered to.

While the overarching theme of the night was of a decidedly modern take on the style, from opener Junkhead‘s spasmodic Dillinger-esque riffage and Diamond Construct‘s more progressive tendencies (these guys have really matured and improved over the last few years), you’d have been smiling from ear to ear by the half way point.

By the time Sydney band Justice for the Damned took to the stage, the Cambo was completely full with an obviously friendly crowd and the five-piece wasted no time in laying waste to each and every one of them. Despite the toy dinosaurs on the stage and some members looking decidedly ‘late ’80s thrash’ in white high-tops and tucked in tees, Justice for the Damned’s blend of ridiculously heavy down-tuned grooving riffs, mixed with equal parts death and hardcore means that while they may not take themselves too seriously, their tunes aren’t to be messed with.

By the time Polaris take to the stage, the audience one big sweaty mess – despite it only being about three degrees outside. One punter has even managed to dislocate his knee in the pit – his only consolation being granted the ability to watch the remainder of the set from side stage.

For the uninformed, Sydney’s Polaris are a highly polished, modern, crushing blend of metal styles, from metalcore to deathcore with hints of progressive elements thrown in for good measure. The band’s mix of growls, screams and clean vocals really adds to the dynamic.

Bodies start falling over the barrier right from the start of the set and continue throughout the show – and anyone not breathless from the full body contact is singing every word at the top of their lungs. It’s really inspiring to see such support and enthusiasm for local music. I’ve born witness to plenty of international touring acts fail to fill the Cambo main room like this.

It was a truly amazing night of Aussie metal.