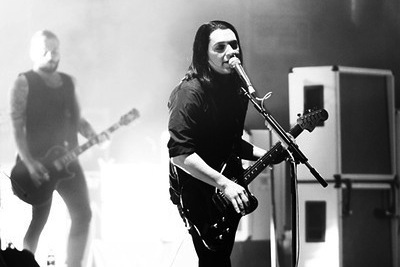 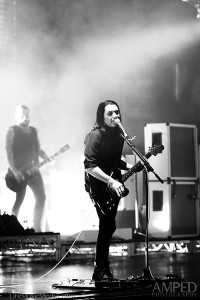 In the great lottery of the Sidewave venue scramble, Placebo must surely have pulled the short straw. Not that St Kilda’s Palais Theatre is generally anything to be disappointed with – its grungy dilapidation holds a special place in Melbourne’s rock vernacular. But when it comes to a furious set by one of the world’s best emotive post-punk purveyors, those torn leather seats are just woeful.

Seated gigs are sometimes just the pits, with often fickle gig-going punters varying between reckless abandon and a studied aloofness, meaning that on any given night you can find yourself jumping to your heart’s content surrounded by fellow revellers, or having to reign in your exuberance or suffer the fate of a thousand daggers shot your way.

Furtive glances were being shot throughout the seated audience, collectively weighing up the options of standing vs sitting (and who would be the first), Placebo kicked off with a dense and heavy version of 2012’s obscure B3 and tailed it with For What It’s Worth. In between, the enigma which is Brian Molko settled the crowd’s almost tangible indecision by admonishing the audience to stand and groove. The audience immediately obeyed as Placebo cracked into last year’s catch-cry single Loud Like Love, with its anthemic refrains sending ripples along the dusty theatre’s rows.

It’s the only time Molko acknowledges the almost sold-out auditorium, as the set proper careened along at breakneck speed. A workman-like focus descended on the overwhelmingly tight trio, augmented on stage by a keyboard-come-violinist, and a due spending their time alternating between keys, bass and bolstering the guitar assault.

A raised eyebrow, a cursive “thanks” and one song introduction was all that was convey between the band and the audience outside of the songs themselves. And, like jilted ex-lovers, it only made the audience want them more: Every You, Every Me and Scene Of The Crime are hinted tastes of what we’re missing out on. While Too Many Friends is a pithy social commentary, and a song detailing the most public of breakups – that of breaking up with his public.

There’s an urgency to this gig which is at first hard to place. On the outset, this is a band with seemingly no point to prove – Twenty Years and latter set corker Special K add to the early-era nods. It’s not until a setlist analysis later on in the night that you can place the chip on the shoulder. It’s a collection of songs where nostalgia just doesn’t get any breathing space.

The twenty-odd songs of the set proper and the encore are shared almost equally between last year’s opus “Loud Like Love” and 2006’s seriously overlooked “Meds’. Just single songs represent the albums in between, and even those generally weren’t their respective album’s highlights: Speaking In Tongues is a slow burn from “Battle For The Sun”, while a moody encore reworking of Teenage Angst is a minnow among the tall trees of their debut. It’s a setlist which speaks volumes about the intent of this band approaching its third decade on the stage: this is not a moment for nostalgia, no matter how dilapidated and grungy the surroundings.