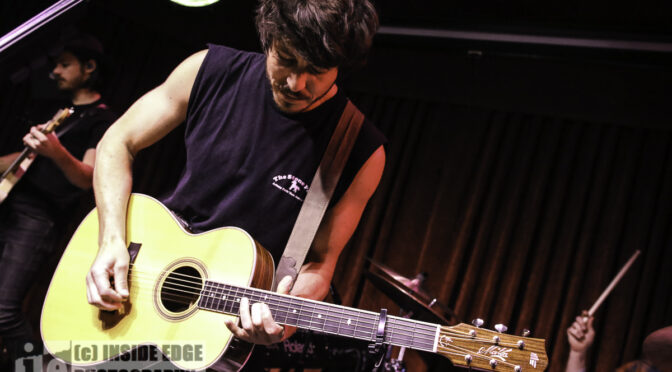 The band had to push their way through the crowd and clamber up onto the stage to get started, and when Morgan appeared, the crowd erupted!  What a homecoming!

We got Young Again, Country Outta My Girl and Kiss Somebody while I attempted to take a few photos before retiring to the back of the room, and then Hey Little Mama before a snippet of Waltzing Matilda just to show the American band members what being an Aussie is about!  Songs for The Summer was up next before the first of several stories from Morgan – this one about his first F150 bought on arrival in Nashville, and then the song that got written about the truck and the whole move to the USA – American Dream Truck.  He still has the truck!

Things That We Drink To dedicated to his late manager, the legendary Rob Potts for believing in him, and sending him to Nashville, with Morgan on keyboards for parts of the song, and prowling the tiny stage in between.  Excellent guitar and bass lines from the band, underpinned by an epic drum sound, this was very much a full on band show.

The band left the stage for Morgan to do an acoustic section, with the promise of a shoey to come later! Keys and voice for How Long, guitar  and voice and guitars for I Do, and then a duet with an old Newcastle mate Mark Wells, with a song they wrote together a long time ago, Big Skies, just two guys with guitars having a blast.

The band made it back for the last few songs, and the start of some local banter with a bunch of fans!  We got a new song, All Right Here, an upbeat top down country toe-tapper with a slick lead break, and we got a promise of a real Newcastle show in 2023 as part of a Down Under tour.  An atmospheric intro with some cracking guitars and drums to Love Is Real, with some slick acoustic playing from Morgan until the guitar went out of tune.  Then into the crowd for a singalong, selfies, fives and hugs with half the audience.  The set closes with Day Drunk – “the sun is up somewhere in the world”, and the rest of the night would be in the “what goes on tour, stays on tour” bucket!

Well done to Morgan for making it happen, to Frontier Touring for allowing it to happen, and to Mick and the team at The Stag & Hunter for believing in live music and putting on a great night – without having to cancel the meat raffle!