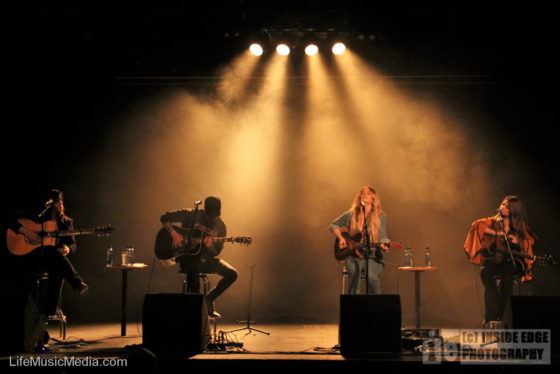 A four-artist bill featuring some of North America’s most exciting established and up-and-coming artists – Brandy Clark, Devin Dawson, Lindsay Ell and Tenille Townes have embarked on a unique tour following their CMC Rocks appearances, in a totally different style and format to what many Country Music fans would be used to. Designed to introduce current artists from Nashville to music fans around the world, this two-hour seated show presented the artists on stage together, in a rare stripped-back environment, mirroring a quintessential Nashville “writers round”, we saw the four, all of whom are on their first trip Down Under, take turns to introduce their songs, sharing the stories behind the tracks, along with some fascinating personal life and career experiences.

Local stalwart Drew McAlister opened up with a totally stripped back set of highlights, including some personal anecdotes and commentary on the stories behind the words of his very Australian country-folk music style.

Then these four young Nashville-based songwriters took to their stools onstage together, two from Canada and two from the USA, and after some brief opening words from Devin Dawson who was unofficial MC for the night, each of them took turns to perform one of their songs, sometimes purely alone, and sometimes with one or more of the others joining in with some harmony vocals, or some underlying guitar chords, and Lindsay Ell providing some deft and subtle solos to a number of the tracks.

We got an unassuming bunch of young songwriters sharing some of their very personal stories that helped put some of songs into context, and gave us all an insight into what it really means when we hear those words from so many of the country music stars…….”then a few years ago I moved to Nashville…..”which made it clear that just turning up with your guitar and a couple of song ideas did not open all the doors to success. These four all put in the hard yards in financing their journeys, and worked themselves relentlessly in pursuit of what they believed in. There was plenty of raw emotion, powerful words, beautiful guitar-playing and some honesty and humour from all four, genuinely excited to be in Australia, humble at the fact that lots of people (a) knew who they were, (b) had actually bought some records and (c) could sing the words to the songs! They also all came out right after the set to talk and have photos taken with anyone who wanted to do so.

This was a rare opportunity to see four of the future superstars of the Country and Americana music scene up close and personal, and to get an idea of what makes them tick – fascinating and exciting all at the same time!

Another great initiative from the Chugg / Potts team, with the support of the CMA who are obviously committed to spreading the country music gospel far and wide.