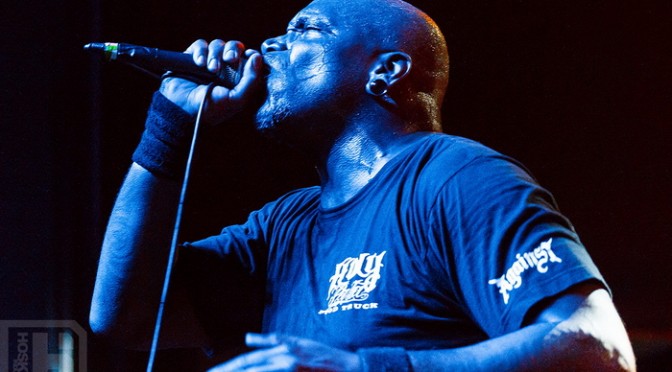 A quick preamble: this reviewer is one of those dudes who worshipsat the altar of the ‘classic line up’ with most bands boasting long careers and the same goes for Brazil’s metal icons, Sepultura. To be frank, nary a single recent Seps album has shot forth from the office speakers since the departure of founding frontman Max Cavalera and until last night’s performance at Sydney’s Manning Bar, there was little chance of that happening, now with only two original members left.

But what a performance it was. We’re dead sure anyone else who walked into the cozy, sold-out Manning Bar with this same prejudice walked out asking ‘what Cavalera?’ Sepultura was tight, taught, energised and clearly stoked to see the room busting at the seams with Seps shirts and bodies pummelling over the barrier. It was a fitting way to end a successful, yet short, Aussie tour.

Clearly not afraid of their own history or the fact that there ARE plenty of fans out there who yearn for the ‘hits’, the 19-song-strong set list boasted an even mix of the band’s ‘classic’ early material, but also plenty of its more modern Derrick-era tracks. It has to be said, that despite the guitar solos sounding a little thin without Max Cavalera’s rhythm guitar backing, frontman Derrick Green handles the early songs as if they were his own and the entire band gels in a way that has the crowd fist pumping the air and crowd surfing for the duration.