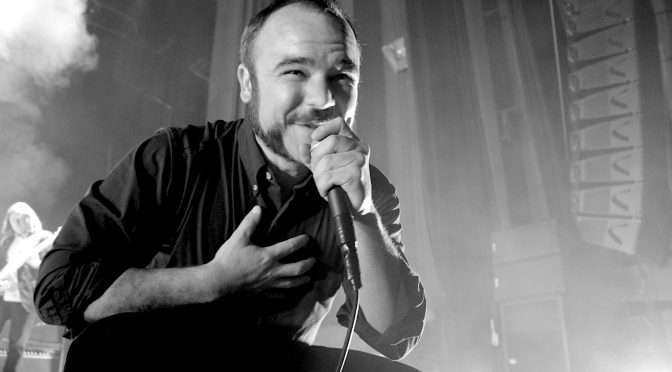 It’s been just over three years since Baltimore (by way of North Carolina) four-piece, Future Islands have played to an Australian crowd.

There’s no doubt that Future Islands are one of the hardest working bands going; with an insurmountable amount of energy poured into each show. Going into tonights set, it was pretty much guaranteed that this was not going to be a carbon copy of any of their previous gigs.

Shrouded in a thin veil of smoke, the band are in their usual, impressive form tonight, with the mammoth set touching on each album of their impressive career.

Watching Herring perform is like watching your dad dance in front of your friends, but there is such a warmth and charisma in how he moves in tune with the melody, it’s impossible not to be completed engaged in what he’s doing; a physical extension of the emotion of each song.

‘Through the Roses’ is just as beautiful live as you would expect it to be, but only narrowly outdone by ‘Ran’; a gorgeous, moving track that tugs at the heartstrings.

The crowd enthusiastically jumps to their feet for ‘Seasons (Waiting On You)’; undoubtedly the bands biggest international track – before a standing ovation from the seated patrons that renders the band speechless and adorably humbled by the reception.

‘Little Dreamer’ closes the night, bringing the Enmore to an absolute stand still; each of us absorbed by the power of the melody to transport us to an ethereal place that Future Islands are one of the best at creating.

I can only hope it won’t be too long before they return to our shores again.