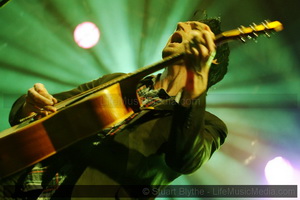 George Street had a long line of Paul Dempsey/Something For Kate fans waiting outside the Metro and eagerly anticipating what is a farewell show (for now) by our favourite enigmatic front man turned solo artist before he embarks on dates in Europe and America. This group were treated for their punctual efforts in the first support act, Papa Vs Pretty.

The trio played frantic guitar rock peppered with interesting harmonies and elements inspired by some of the best bits taken from sixties and seventies pop. Guitarist, Thomas Rawle entertained the pop devotees with his cheery red axe and excellent lead guitar work. The group are still quite young but scream potential as they have all the markings of a silverchair about them. Mark my words – give them a year or two.

“Piper” received a few good cheers while the other songs had some catchy rock drums courtesy of Tom Myers. These rowdy young upstarts put on a raucous show not too far removed from their parents’ garages and numbers that brimmed with grungy bass lines, power and volume. However things were not so dirty as to be completely void of sweet lamentations, so basically it was loud, a little raw but oh so fine.

Dan Kelly and His Dream Band were second supports. They cracked jokes and were completely jovial; little did they know that the Sydney Comedy Festival wasn’t due to start until the 19th! With some interesting sartorial decisions when it came to stage attire (including no less than an aviator hat and goggles; a wrap-around skirt and explorer’s hat) the boys entertained us with their positively kitsch pop-rock songs. The lyrics were what you’d expect from the likes of Darren Hanlon or Custard. To paint a quick picture there were songs about hot outdoor bogan sex (“Fire & Theft [The Landscape Gardener’s Dream]”); good Catholic boys reading material (“Catholic Leader”); corrupting young people with ice; and dangerous liaisons (“I Will Release Myself [Unto You]”).

The numbers were a tad silly but ultimately very fun pop and mellow, alt-rock songs full of enthusiasm and exuberance. “The Decommissioner” had a false start and you could hear some chatter from some rude punters during this. Ultimately it seemed that squeaky clean pop songs (think Youth Group and James), interesting word play and catchy lyrics were not quite enough to win over some people, which was a darn shame.

It was now time for the man of the hour – or hour and a half if we’re to be precise – Paul Dempsey. Armed with just an acoustic guitar, “Out The Airlock” had fans filling in the space usually reserved for the softer moments with loving cheers of adoration, while others strained their camera phones to capture a little piece of the action for posterity.

“Bats” saw Dempsey’s ethereal vocals reach right up into the high heavens and transcend the moment. This saccharine flash carried us through to the glass half full folk of “The Great Optimist”. Dempsey endeared himself to us by asking for some house lights to illuminate the audience. It was like a loving, elder brother cheeking up on and looking out for us. In one small action he proved what we’d all suspected, that he’s just an all-round nice bloke you’d love to share a beer with.

The crowd lapped up the solos in “Have You Fallen Out Of Love?” but the cover of Musiq Soulchild’s “Miss You” put more than a few grins on people’s faces. And why wouldn’t it when everyone sang along to the instantly-recognisable chorus of “oh ohs” lead by Dempsey in the guise of music nerd and aficionado.

Next up was “Take Us To Your Leader” and “Fast Friends,” the latter serving as a good opportunity to end a long-standing feud between hip hop music stars and metal head in the dressing room dunnies at the Metro. It was a nice touch and got everyone feeling like they were a small part of a big, communal love fest. Not to mention the fact that this example shows the power of music – and Dempsey’s songs of course – as they traverse boundaries by being personal and meaningful to both individuals and groups alike.

There were two sentimental, Something For Kate covers in “Whatever You Want” and “Reverse Solution” with some reverb added to Dempsey’s voice giving it the overall effect of a cherubic angel and leaving us all feeling like we’d received a slice of heaven. The main act was rounded out by “Ramona Was A Waitress” and a cover of Bruce Springsteen’s “Born To Run,” as everyone in attendance agreed that Paul Dempsey should be renamed Australia’s own boss. The group then returned for a quick encore with some band introductions preceding “Bird In A Basement” and “Safety In Numbness”.

Paul Dempsey left us all feeling entertained as he had tugged at our heartstrings with his cerebral folk-pop songs. We had participated, shared and enjoyed an extra special evening of wonderfully introspective tunes. The sad thing is now we may have to share him with our cousins overseas.

– Buy: Something for Kate from iTunes 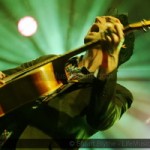