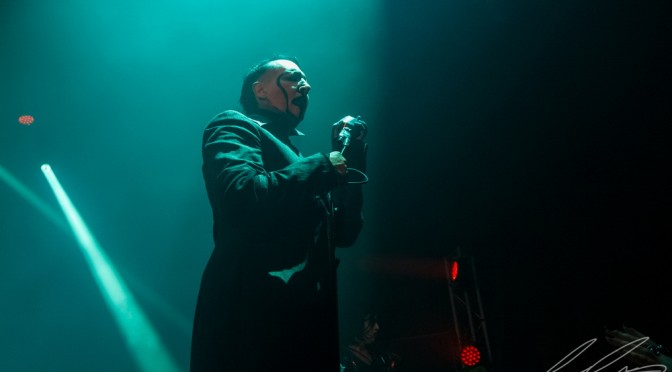 Review and Photo by Calvin Cropley 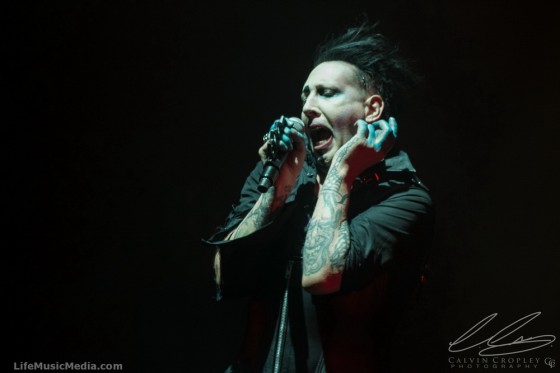 Marilyn Manson’s event started with all lights out, making the venue pitch black. Suddenly there was a blinding white light, then a mixture of red green and purple that pulsed through the venue and audience. The audience responded with a roar.

Marilyn Manson started with a few older songs including the smash hit ‘Rock Is Dead’ 1999 and ‘(s)AINT’, and ‘2004’ from 2004’s album ‘Lest We Forget: The Best Of’, new songs were also performed from the previous album ‘The High End Of The Low’ which hit shelves in 2009 and to introduce the new titles like ‘Deep Six’ from the album ‘The Pale Emperor’. This album was released about a month ago and already people knew the words. Twiggy Ramirez was back and was rocking out to the old stuff as well as enjoying his time interacting with the crowd.

Props included the satanic crosses, flags and wicked lighting that made the foreground of the stage look like a grave yard. The banners and flags oddly appearing out of nowhere made the event even more exciting and shocked the audience when they noticed them. Confetti and smoke filled the air. The concert was almost larger than life, filled with both the young and the old wearing various gothic fashion.

In comparing studio verses live, live is definitely the way to go. If you’ve never attended a Marilyn Manson Show then this should definitely go on your bucket list.