Little Steven and the Disciples Of Soul at Enmore Theatre, Sydney – 25 April 2019
Review and photos by Peter Coates – www.facebook.com/InsideEdgePhotography 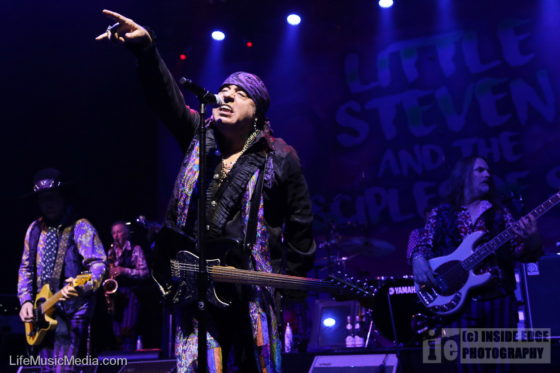 I was probably expecting a more Springsteen-derived set based on my less than comprehensive knowledge of the Little Steven back-catalogue – knowing the songwriting link with Southside Johnny and the Asbury Jukes which also sits within that Jersey Shore guitar-based soulful blues/rock arena.

What I was not anticipating was the extraordinary set of Blues, Motown, Soul and Gospel-tinged blues-rock delivered by an 11-piece band, with the ‘Divas of Soul’ on backing vocals that covered 50 years of musical history, mainly from Detroit and New Jersey, and included a couple of cracking songs off the soon to be released Disciples of Soul album Summer of Sorcery, following on from the Soulfire Live record that followed the reformation of the Disciples in 2016.

The curtains at the Enmore opened up to reveal a Big Band set up including a 5 piece brass section, drums and Latin percussion, two keyboards, three backing singers, guitar and bass, all backing up the multi-talented singer-guitarist, all contributing the most fantastic colour and sound to the set.

The band opened up with a boisterous rendition of Sweet Soul Music which just highlighted all of the components onstage, and set the tone for much of what was to follow – with the Soulfire title track up next, and then the original Lyin’ in a Bed of Fire, before setting out the blues pedigree with a 12 minute guitar-driven version of Etta James The Blues is my Business which included an extended Hammond organ piece, and the first of a few solo spots from Trombone and Sax before Little Steven rips into another solo.

The Jersey Shore influence made the first appearance on Love On The Wrong Side of Town, one of a few Southside Johnny tracks written by LS and Bruce, with some great work from the backing singers, and another Sax cameo which is very much in line with the Springsteen connection. LS is very much in the troubadour style of storytelling between songs, some of it stemming from his political and social activism, and some delivering titbits and insights into the early days of the E Street Band, and the reliance on the radio for so much – Until The Good is Gone has a real Motown and gospel feel to the beat and horns, and we got a sermon mid-song from LS extolling the benefits and joy of real music delivered by real musicians, that introduced all parts of the band as the song built to a thunderous crescendo.

Angel Eyes featured some sensational guitar harmonics between LS and his sidesman Marc Ribler, and then we get an eastern intro from Sitar and keys to Under The Gun before the drumbeats and the guitar kicks in with the riff punctuated by the crack of rhythm sticks from half of the band.

Some Things Just Don’t Change (Southside Johnny & The Asbury Jukes) was a song written for David Ruffin of The Temptations, but never delivered to him so SJAJ did it instead, again with a very Motown vibe and chock full of soul.

An obscure cover of Saint Valentine’s Day included jangly 60’s guitar and some great drumming from Richard Mercurio, with LS showing the versatility of his voice, which shows a real New Jersey drawl to this one, and another great solo from Ribler, while the Divas are rocking out and bringing the soul! I Saw The Light kept rocking it up, and shows off another great twin guitar solo, with the keyboards and brass section getting loud.

There is a real big riff to start up Salvation which has a little Bon Jovi feel, and mid-song LS delivers a solo all of his own, which he turns into a slightly off-tune dawdle, before the chorus powers back in, with the original BJ ‘whoah whoas’ dominating the final section!

A homage to Blaxploitation movies with James Brown’s Down and Out in New York City, with solid bass from Jack Daley, and that wah wah guitar sound, with the girls dancing and wailing as if their lives depended on it. The brass section gets another big feature with trombone and trumpet solo spots before the big sax and then the flute over a psych jazz-funk backing, and the second trumpet to round out the segment.

The two keyboard players show more versatility and hit the front with accordion and 8-string mandolin for a rendition of an Italian / American look at dealing with a millennial granddaughter, with Princess of Little Italy showing a classic guitar sound and those Jersey Shore vocals.

Two songs from the imminent new album were up next, with a Jersey / Motown mash up in Love Again, followed by a ripper of a standard 12 bar blues rock track with Superfly Terraplane, with the added warmth and texture of brass and backing vocals, but very much riff-driven and LS gives us a real rock guitar solo before the brass takes over leading into a couple of frenetic final choruses and more of that riff to close out the song.

Another SJ track in I Don’t Want to Go Home before the Enmore descends into a Mambo-frenzy with Bitter Fruit at last giving the percussionist free reign to showcase his skills, with timbales and toms, in his solo and a pumping duet with the drummer. Forever closed the set proper, and the whole band took the curtain call to rapturous applause.

There was no effort to leave the stage and come back for the encore……we just got a couple of special guests to sing songs LS had written for them, with Jimmy Barnes appearing to lead Ride the Night Away in fully Barnsey style, and then the looming figure of Peter Garrett appears to add to the vocal mix with the apartheid protest song Sun City which pretty much brought the house down. 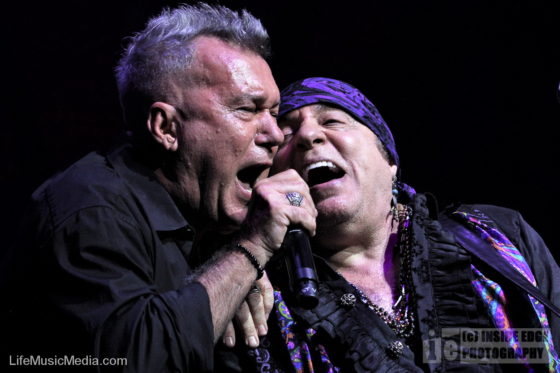 To close the show after an uplifting 2½ hours of the highest-quality blues / soul / rock from a bunch of seriously talented musicians, we got a wonderful version of Out of the Darkness from the 1984 Voice of America record, which gave us a fitting end to a special night!

Check out all the photos from the show here…
Photo Gallery : Little Steven and the Disciples Of Soul at Enmore Theatre, Sydney – 25 April 2019 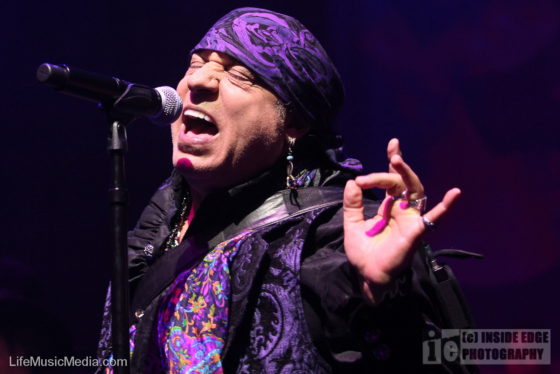