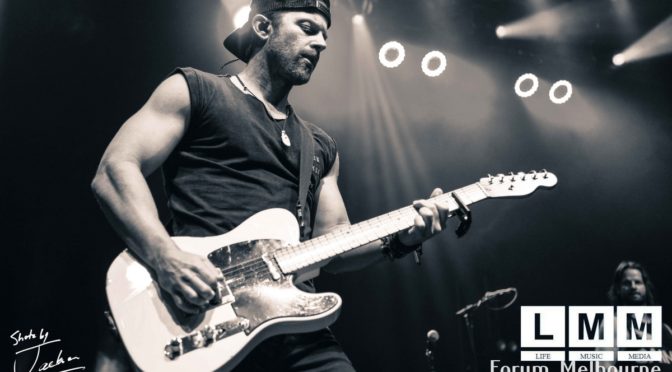 Playing in Melbourne central on ANZAC day 2018 were two of American country music’s hardest working artists. Lee Brice and Kip Moore both men well known in Australia joined forces to give fans nothing short of a powerhouse performance at the Forum.

For the 2000 in attendance it was high octane from the onset. Hitting the stage first Lee Brice, attracted faithful members of the “drinking class” matching him word for word as he took the audience through his impressive catalogue of hits. No stranger to our shores Brice has been here before as one of the headliners of CMC Rocks in Queensland. The giant from South Carolina was genuinely taken back by the devotion of the audience. Starting the night with “Picture of Me” then moving promptly into “Hard Tao Love” Brice occupied the entire stage moving from side to side reaching out his large frame to touch the audience at every opportunity. All the hits were played with ongoing appreciation. “A Woman Like You”, “Love Like Crazy” were nearly drowned out by audience backing vocals. Just when you think its time to come up for air the tempo kicks up again. “Drinking Class”, “Truck” and “Parking Lot Party” finished the set with Brice and his band of brothers leaving the stage. An impressive drum solo echoed a brief return to the stage finishing with “I Don’t Dance”.Brice has that ability to get anyone in his presence into the show,. Thanking our serviceman and women for their sacrifice on Australia’s remembrance day could at best be seen as tokenistic this is far from the case with Brice he has a long history supporting the military.

Brice’s ability to create music that hits you right in your soul ensures Australia will continue to receive his presence for a number of years to come.

A brief break and Kip Moore hits the stage opening with “Fast Women” from his latest offering “Slowheart” before moving into “Sunburn” and the hit “Beer Money”. Moore has an immediate connection with the crowd. The look on audience faces speaks volumes, its not his first time in this country and he loves the relationship, he simply gets Australian Country fans. Moores voice has a gravel tinge to it, there is power and passion, almost magnetism you are drawn to it, this is a great live performer. Maybe the attraction is as simple as honesty, the small crowd offer an oversized pub atmosphere, perhaps this is where he most at home, I have seen him in much larger venues and he is just as comfortable.

Showcasing “Slowheart” throughout the set “More Girls Like You”, “The Bull” “Bittersweet Company” all well known by the audience, singing with hands out hoping to touch the man as he moves and works the stage. Moore is equally at home as an accomplished guitarist or with a microphone standing on one of the two raised boxes on stage to get extra reach toward the audience. Make no mistake Moore is no slouch on his feet either he can dance. Showing a true appreciation for audience and support given to him over the past 5 years “It does not go unnoticed” Moore echoed to the audience.

Winding down with the smash “Something bout a truck” Moore dances his way off the stage. Returning and finishing his set with “I’ll getcha high, I’ll getcha low, I’m the guitar man” Moore left but not before promising the audience his plan to return in 2019 with an acoustic tour, can’t wait for that one. Thoroughly enjoyed.

Finally, a big shout out to Mississippi native Charlie Worsham on his first visit to Melbourne, Australia. Opening for the evening he left a lasting impression on the full house.

Kip Moore Setlist
Fast Women, Sunburn, Beer Money, Wild Ones, Pled The Fifth, Just Another Game, I’m To Blame, Come & Get It, Backseat, More Girls Like You, The Bull, That Was Us Bittersweet, Hearts Desire, Truck, Last Shot, 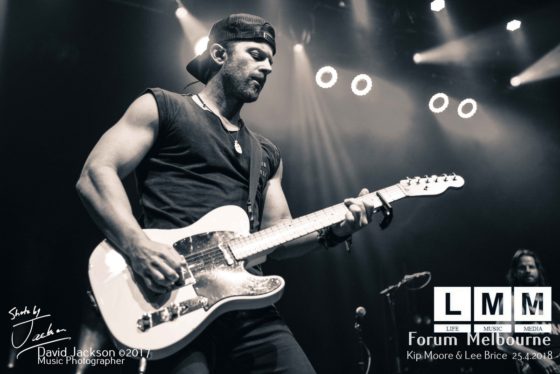