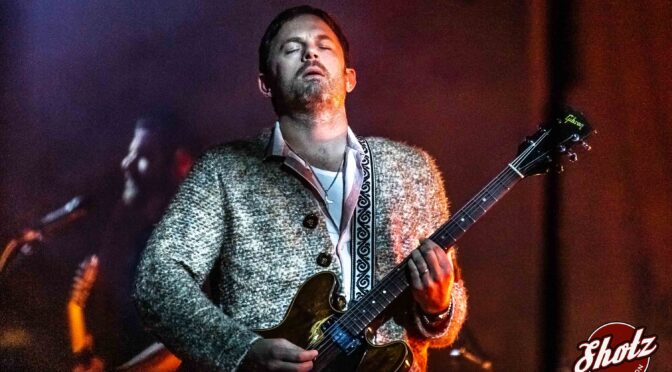 Dressed in a cardigan that would look more at home in a goodwill store, lead singer Caleb Followill led his band of brothers from one song to another. Opening with ‘When You See Yourself, Are You Far Away’ from their latest album, the band touched on all the hits with a few surprises during the night.

The audience, some of whom had travelled over flood waters and constant road diversions to get to the gig promptly settled into a continuous sing-along with every song, at times this appeared to surprise them just how well their music is known and the band and admired in this country. Caleb Followill adds a touch of humility to his stage presence. At one point, he stopped to reflect on his dress attire, referring to “that cardigan.” “It seemed like a good idea at the time, but now it is just itchy.”

Throughout the night, the lighting and visual effects were stunning; this was the whole show taken to a rural arena; kudos to the band for doing this. As for the sound, the ground had no grandstand, so it was perfect, with no walls to bounce the sound around. From front to back, you got to hear the tightness of this band and Followills voice in full flight; it was a treat to the listener.

After a 22-song set and almost two hours on stage, finishing with ‘Use Somebody,’ the band said goodnight and departed, only to return and rev the crowd even further. Saving some of their biggest hits until the end of the show, the three-set encore included Knocked Up, Waste a Moment, and finally, Sex on Fire.

Standing on stage at the end, waving and simply taking it in Caleb Followill appeared to take a moment to stop and look at what he and his band of brothers had created in this small town one cold October evening; you don’t see that very often. With five more shows to go on this tour, including a sold-out Sidney Myer Music Bowl in Melbourne, the admiration from fans, both old and new, will only keep growing.

You cannot complete this review without mentioning the support act The Temper Trap. Led by charismatic front man Dougy Mandagi the band played a brief set culminating with their well-known hit ‘Sweet Disposition’, which had the crowd dancing and paved the way to an almost perfect evening. I look forward to hearing a complete set from this band down the track.

Check out our Photo Gallery : KINGS OF LEON at Mildura Sporting Precinct – 29 October 2022

Tickets for all shows are on sale now, visit TEG DAINTY