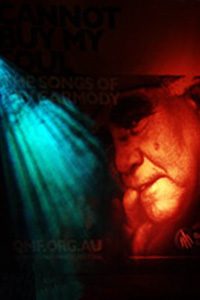 Sadly that was a common response when I mentioned tonight’s gig to friends. Sadly, it was my initial response, too. However, I’ve been told that that is what the show is all about: taking one of Australia’s finest songwriters and exposing his talents to a whole new audience. Kev Carmody has been singing about the realities of Aboriginal society for the past 24 years through blunt protest songs and poetic ballads; blending folk, country, rock and gospel. In 2007 Paul Kelly pulled together the who’s who of the Australian music scene and an album was released featuring those singer songwriters performing Kev’s songs. Tonight those artists – including Paul Kelly, Bernard Fanning, Missy Higgins, John Butler, Clare Bowditch, the Herd and the Drones – will take to the stage to honour a man who is very much alive and passionate about his people and his country.

I’m not quite sure what I’ll find as I make my way through Brisbane’s Botanical Gardens towards the Riverstage. As this is the signature event of the Queensland Music Festival I’m expecting quite a good roll-up. I’m not expecting a sold out show and a sea of people, young and old, sporting bright red bands around their heads or arms – but that’s the heartening scene I’m greeted with as I enter the gates. I find a patch of grass on the hill just as Aunty Val, a Goreng Goreng woman from Central Queensland, takes the stage to welcome us all and acknowledge the Turrbal people as the traditional owners of the land. There’s a bit of nervous laughter when she forgets Kev’s name but there’s no shortage of people ready to refresh her memory. The Festival’s Artistic Director Deborah Conway is next on stage to remind us why Kev was recently named a Queensland Great and to open the concert. As we start to applaud a stream of people start weaving their way through the crowd towards the stage. It takes us a few seconds to realise they’re tonight’s performers, with Kev at the forefront. When the raucous applause dies down Kev tells us that we’re lucky to be here tonight because years ago this would be classified as an illegal assembly. He refers to the musicians onstage with him and says he’s over-awed.

“They make me proud, they inspire me and humble me. They’ve taught me how I bloody well should have done things in the first place!” Kev makes special mention of Paul Kelly who is responsible for bringing together the stellar line-up on stage. It’s a a nice segue into the first performance of the night: Dan Kelly (Paul’s nephew) with I’ve Been Moved.

I hear shades of Paul when Dan sings but he really comes into his own as he performs this song which is about being touched by life and nature. He’s being backed up by the band that will accompany the majority of musicians for the rest of the evening comprising members of the Drones, Midnight Oil and Dan’s band the Alpha Males. Sara Storer is up next with a country tune called Moonstruck. It’s fitting for the cool evening as the sun sets beyond the river behind this iconic venue. No one is lost who finds the moon or the sweetness of the wattle’s bloom/Spirit of the moon it guides me home.

In between songs Kev sits around a ‘campfire’ and tells stories, explains the meaning behind the songs and talks about what was going on in the state and the country at the time he penned the tunes. The stage lights are dimmed and the spotlight is on Kev and Broome boys the Pigram Brothers. They begin to play Eulogy for a Black Person. It’s a sombre song with dark undertones sung with a gravelly voice and what reminds me of a wolf’s howl in certain lines. The slide guitar features throughout. Lay me down where the forest blooms/Wrap me in Mother Earth/Make no monuments or mortal crowns.

Glenn Richards (Augie March) begins the story of the Droving Woman, a rambling but emotive tale of life and loss on the land. He’s accompanied simply by an acoustic guitar and violin. Paul Kelly joins Richards a few verses in as the drums kick in and the story continues. Missy Higgins takes over for the last verse or two as the song and the story reaches its climax. She sings with passion and conviction like a true storyteller. By this point the audience is in raptures and I’ve well and truly been swept up in the song. Yes, that’s a tear in my eye!

[Photo: Stuart Blythe]
Tex Perkins sings about the next stage in Kev’s life on Darkside. Kev explains that when work dried up on the land he made for the city – but was not quite prepared for what he found. Perkin’s walks onstage in character reading a newspaper and paints a picture of a grimy, dusty city devoid of much character or promise. This song was made for him to perform. South of the freeway/Those Logan kids/Hangin’ out at that trashed out rooster and ribs/It’s like a scene from hell. On the screen behind the band there are scenes from an Aboriginal land rights march in Darwin. It’s a clear reminder of the times in which Kev was living and writing and adds a helpful context for the songs.

It’s obvious when crowd-pleaser Bernard Fanning is due on stage – I can hear the claps and whistles long before I see the man! Fanning sings a bluesy number (with gusto!) called Elly about a 19 year old who “had the looks that’d make a grown man sigh” trying to make her way in the world. To make it to the top Elly sacrificed a lot/Just to survive/Just to survive. Kev can’t stop singing Fanning’s praises. He calls him a great Queensland product and says with talent like this the old ones can clear off.

But there’s more talent on the way. Three piece hip hop outfit Last Kinection provide their take on The Young Dancer is Dead. An MC raps the verse and is joined by a female vocalist in the chorus. It’s Aussie hip hop but this crew gives it their own Aboriginal flavour. They sing the story of 18 year old Daniel Yock who was picked up from a Brisbane street in 1993 and taken in a paddy wagon to the Brisbane watch house only to be pronounced dead on arrival. The next year six police officers were cleared of involvement in his death.

The Drones are next to take on a classic Carmody tune. River of Tears is the perfect choice and it suits the Drones’ murky, sinister style down to the ground. Shot him dead on his Marrickville bed with a pump action 12 gauge shotgun/200 years in the river of fear gunned him down. The drama and force of the song builds until the band unleashes a typical Drones assault. Kev comes on stage shaking his head in disbelief.

“The power and the passion!” he says. “They got me to do some support gigs with them, you know. Imagine that!”

Kev introduces a quieter song “for the older ones like me”. It’s called I’ve Been Living on a Wire and is a prodigal son tale of a young man who returns from the city and is welcomed back into his community by the local women. In this case Troy Cassar Daley is the son and Clare Bowditch, Missy Higgins, Sara Storer and Laurel Edwards are the welcomers. Came back from the city/Said cuz where you been?/Said brother, I’ve been living on a wire.

Clare Bowditch stays on stage for the next tune, Blood Red Rose. In an interview prior to the concert Bowditch told me this was a song that resonated with her instantly. It’s clear from the sincerity in her voice and her performance. I think she’s struggling to hear the band and there are a few bung notes here and there but nonetheless a stirring rendition of a beautiful song.

Throughout the performance Kev has been weaving in stories from his life on the land and in the city. Now he tells the tale of his first experience in a university library. He stands to one side and closely watches other students go through the process of borrowing a book. After a while he looks down at the book in his hands – it’s a dictionary and has fallen open at the word ‘democracy’. Kev says he then began to search for the meaning of the word, a search, he says, that he is still on today.

Steve Kilbey from legendary Australian band the Church is next to put his stamp on one of Kev’s songs. It’s Images of London and sounds like the wide-eyed observations of a young Aussie the first time they visit the hustle and bustle of the Brittish hot spot. Once again it’s a story told to song. Kev’s ability and talent is becoming blindingly obvious to me!

Hip hoppers the Herd bounce onstage next for a cover of Comrade Jesus Christ. Kev informs us that it was and still is quite a controversial song, but one of which he is immensely proud. It’s all about the character of Jesus and what he would be like if he was walking the earth today – his response to social injustices, political spin and religious intolerance. He’d condemn all corrupt law and order/Tear all man made hierarchies down/A compassionate agitator, one of the greatest the world has known.

John Butler keeps things moving with a tune that he performed with Kev at the 2006 Make Poverty History concert in Melbourne and which frequently makes it into his set list. It’s called Thou Shalt Not Steal and Butler makes it his own with his signature slide guitar brilliance. Kev can’t help but praise Butler for the taking Aboriginal issues and putting them out into the mainstream.

Throughout the evening Kev has highlighted the plight of the Aboriginal people throughout the last two decades and noted the gains made in terms of land rights and racial equality. He does, however, point out that there is still a lot left to fight for. Paul Kelly and Dan Sultan – described by the Sydney Morning Herald as the ‘black Elvis’ – team up for the second last song of the evening. It’s a fitting tune called The Land Is Mine.

Tonight’s final song is perhaps Kev’s best known: From Little Things Big Things Grow. It’s a song he penned with Paul Kelly in the late 80s about the Gurindji stockmen who went on strike and walked off Wave Hill station. The first line is ‘Gather ’round people, I’ll tell you a story’ and for the next ten minutes or so that story is sung in harmony by all of the night’s performers. I look around me and see people swaying and singing along. It sums up the sprit of the evening and the message that Kev is trying to get across. It’s a rare and beautiful sight to see so many legendary Australian performers shoulder to shoulder, hand in hand singing with honesty and conviction. Here come the tears again!