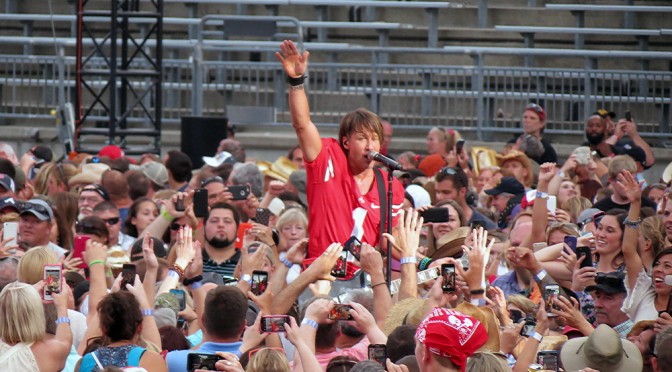 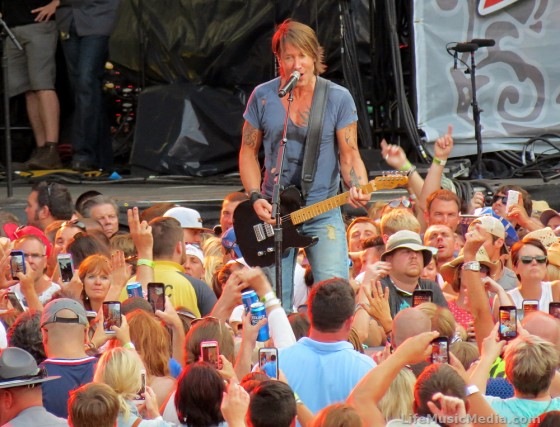 Ohio University Stadium home of the Ohio Buckeyes football team, the current undisputed national champions. The stadium itself holds over 105,000 and is one of the biggest in the USA. So what has that got to do do with Keith Urban you might ask? On Sunday I got to witness one of country music’s biggest on stage in front of 90,000 crazy fans. Urban was booked as a headliner at the inaugural Ohio Buckeye Music Festival held over the weekend in Columbus Ohio.

Urban not a stranger to playing for big crowds was visibly taken back by the size of the audience. Working on a philosophy of “build it and they will come”, crowds flocked to this festival. Outside was the American tailgate parties I has heard about but never seen. People were dressed up in costumes. There were BBQ’s and a variety of elaborate attire that simply had to be seen to be believed. Inside the stadium housed bikini clad women and all sorts of fans who had driven from as far as Canada to come to this event.

Taking the stage with his three piece band Urban looked trim and athletic, “are you with me Columbus?”. Opening with “Long Hot Summer” the heat was turned up to boiling point. Working a stage that took three days to build including three walkways Urban moved around like he owned the place. We all know he was born in New Zealand but Australia claims him as their own and why not. I was proud to see this guy truly fly.

There was no shortage of hits “Kiss a Girl”, “Sweet Thing” and “Somewhere In My Car”, to name a few. The audience was also introduced to Urban’s new single “John Cougar, John Deere, John 3:16” featuring Urban on bass including a brief introduction of the Pink Floyd Classic “Money”. Wearing a red Ohio State football shirt complete with Urban and the number one on the back the crowd was treated to a fast pace show restricted only by time. Playing for around 80 minutes Urban packed them in. His band lead by long time member Jerry Flowers was tight and complemented Urban to a tee. The stripping down of the band, fresh new material and watching the master showcase his obvious talents is not only refreshing but testimony to his survival.

Two audience highlights worth mentioning were the opportunity for a local girl to join Urban on stage to showcase their own individual talents singing the Miranda Lambert part in the hit “We Were Us”. This was followed by Urban starting the crowd favourite “You Look Good In My Shirt” on the main stage and culminating it on a makeshift stage in the middle of the stadium. One lucky boy scored an autographed guitar given away at all of Urban’s shows. There was autograph signing on stage “Talk amongst yourself while i do this” he joked to the packed house.

Watching a true talent pick up a guitar and take it to another level was something else. I look forward to the new album and a possible Australian tour as early as next year. Given the talent and crowd appeal surely Urban will be a shoe in to close Country Rocks Queensland next year??

Overall awesome, a true pleasure to watch and be part off. The festival is penciled in for June next year. Having visited this state many times over the past 25 years it is a great place to come to, access is easy, people are very nice and the festival which runs for two days is very reasonable given the talent. I will hopefully see you again Ohio in 2016.