Jimmy Barnes is touring nationally on the back of his second book Working Class Man. The show comprises of part story telling, part live music. The lights go down and Barnes hits the stage with his usual gusto. Having just celebrated his 62nd birthday he looks great dressed in black and agile. Although on the surface life appears good, life has not always followed an easy pathway. Barnes portrays a picture of self disbelief of his ongoing success, although no-one in the country would question his ability to sing or perform.

This show is a roller coaster, like it or not you ride the Barnes express, a warts and all look at everyday life of a man that has (in the public eye) been on top of his game for almost 40 years. Throughout the shows two sets it raises emotion, believe me it will pull at your heart strings. There are moments which are hard to believe namely the quantity and lengths Barnes went to to destroy his body over the years. Barnes could easily have joined other music heroes like Joplin, Cobain and Hendrix and burnt out by only 27 years of age. Somehow he pushed through and now lives to tell the tale.

The show fluctuates between stories and music, the division of the stage complete with couch, numerous alcohol bottles, equipment cases and a dressing room table complete with lit mirror. The band complete with double bass and upright piano support an easy transition for Barnes to move between the two areas. The stage is comfortable for Barnes where he dominates and has for over 40 years. In contrast is the lonely spotlight of the dressing room. As the lights dim in the dressing room you get the impression he is talking solely with you, the quiet is deafening. Throughout the night Barnes is constantly on the move and his audience interaction is near perfect.

Barnes sets the stage by taking the audience back to Adelaide in the mid 1970’s where he first met fellow band member and soon to be leader Don Walker, with that Cold Chisel was created. Elizabeth, Barnes place of residence was tough as a young and very angry man who was searching for more, he was drawn to music. There is fond reference to the Largs Pier Hotel in Adelaide a violent dirty pub in the 70’s where he felt very much at home. The progression of Cold Chisel culminating into arguably Australia’s greatest ever band. The rise was hard and plagued with violence and arguments from the start. Barnes blames himself for a lot of this. A final album and The Last Stand one of the biggest tours in Australian history followed. Part of Australian music history ended in December 1983, Cold Chisel was finished.

Throughout the show as Barnes moves from stage to dressing room the audience eyes are drawn to various props around the stage. Behind the large screen is a carefully placed collection of gig street posters featuring other iconic bands including The Angels, Jimmy & The Boys and even Sherbet, $4.00 bought a lot of entertainment in the 70’s. Following intermission these posters changed to reflect bands of the 90’s including Powderfinger a very cool touch.

On return after the break the audience is treated to Barnes sitting on the couch complete with electric guitar strumming the opening bars of “No Second Prize”. The second half takes the audience into the artists solo career which has lasted for over thirty years. Standing before a sell out crowd was a man who literally had everything in his possession or at his feet and was determined to turn that into nothing. Common themes of excessive drug and alcoholism combined with breakdowns of friendships, relationships and the death of loved ones were everywhere, there was a lot of wasted time over the years. Following decades of abuse Barnes body finally gave in. Sadly, a decaying physical health was now working in unison with a deteriorating mental one. Heart surgery and a close call with an attempt of suicide was the final catalyst for change.

I found the later part of the show very confronting. Barnes describing himself as a born alcoholic speaking candidly of his genetics with both his father and grandfather succumbing to alcoholism. Barnes describes his life as the longest suicide attempt in music history lasting 5 decades, fortunately although the attempts were chronic they were unsuccessful.

Whilst it would be easy to end this review on a low there is so much more. First of all this autobiography is a love story, Barnes meeting his Jane in the 70’s. Jane has been with him all the way, in love and side by side the night is also about family and kids. His love for all are mentioned with deep affection and it shows all over his face. Nearing the end of the show Jane joins her man briefly on stage to give him a smile, a kiss and some flowers. The audience connection continues with a heartfelt plea to the masses, an open invitation to accept an illness and get help, sadly this illness continues to plague Australia to this very day. During the show you are also forced to ask yourself if mental illness can consume one of Australia’s greatest music talents it can happen to anyone, its OK to ask for help.

For the true Jimmy Barnes fan it’s important to note this show is not a regular concert there is no high octane energy, no belting out hit after hit. The live music is a fantastic journey through life, 180 minutes fly by. To the music lover there is plenty of insight into Cold Chisel, INXS and many artists of the time, the discussion about Countdown is worth hearing on its own. As Barnes continues to tour the country this is one of those shows you simply have to see. I loved it and thank you Jimmy Barnes for your honesty and sharing your life story. 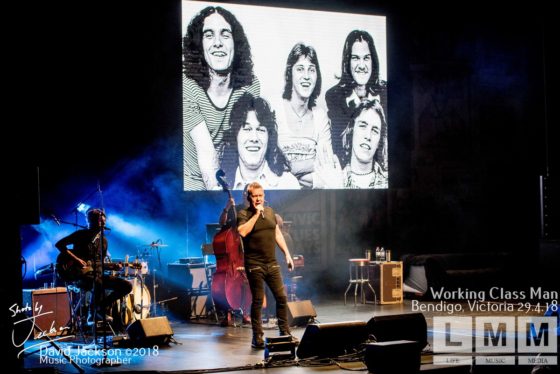