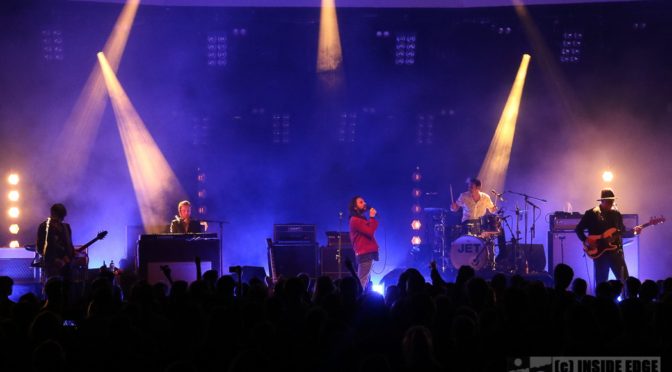 15 years in the making, and Aussie rockers JET are back in the swing of it, using the 15th Anniversary of their debut album GET BORN as an excuse to get out and re-introduce themselves to the kids who bought the record back in 2003, and who are now in their early thirties and perhaps better able to appreciate quality songs and great live performance than they were!

Coming along for the ride are Hobart punk popsters A.SWAYZE & THE GHOSTS who were new to me, but not to everyone, and who had just come off a run of dates with Luca Brasi and The Cosmic Psychos, which gives you a sense of the slightly offbeat nature of this high-energy band! A bit of the classic Stooges and MC5 feel, mixed with some Snowdroppers cocky delivery from the main man Mr A Swayze, and some old-school new wave such as the Cure or Buzzcocks, all wrapped up in a Smith St Band goodie bag!

The JET boys strolled on to the stage as the lights dimmed, and launched straight into Last Chance as they ran through the Get Born album from the top, sounding huge in the excellent NEX room, rolling back the years with Are You Gonna Go My Way and Roll Over DJ to get the healthy crowd moving, before Look What You Done and a version of Get What You Need featuring a cracking solo from frontman Nic Cester.

The acoustic comes out for Nic with Move On, with Chris Cester coming off the drum riser to sing lead and slap the tambourine, before the boys chip in with more guitars and harmonica. Radio Song sees lead guitarist Cam Muncey swapping the Flying V for an acoustic, and the overall psychedelic feel has the same Beatles vibe as always.

The acoustic interlude over, the band slams into a brutal intro to Get Me Outta Here and the crowd kicks off again – there is something about an AC/DC type riff that always resonates with an Aussie crowd – with the song featuring a huge ending that never quite finished, before sliding into that classic riff, and the opening scream of Cold Hard Bitch, delivered with power and a touch of venom.

Main game over, so what do the band play now?

Come Around Again was given some added depth from the Hammond Organ followed by a wild rendition of Take It Or Leave It driven by the bass and drums, with Cam Muncey blitzing the lead lines on guitar. We get a drum intro to the big-sounding Lazy Gun, followed by another spacey track, the oddball Timothy that was an outtake of the Get Born record, sung by Chris C from the kit.

The band is on the first night of the tour, and had been in the venue the day before doing final rehearsals, so this show was something of a preview test show before the big city shows, so the band may have been as focussed on what they were playing as on the delivery itself…..but as the night wore on the interplay onstage got more relaxed and energised – and remember, some of these tracks had never or rarely been played live.

Some of the well-reported influences remain clear, in the Beatles, Oasis and other Brit rock bands both old and newer – however the lead-in to She’s A Genius was much more like The Knack than a British band, and remains one of my favourite songs ever. Black Hearts has the signature rhythm section and clean guitar riffs of many Jet songs, and Hey Kids with its deliberate tempo changes and multiple harmonies keeps the excitement levels high. The overall sound is huge, helped by the bassy acoustics of the room, but the band retains a lot of that raw feel from 2003, with most of the songs standing up to the present day, testament to the classic rock roots and the quality of the songs themselves.

Skin and Bones followed by Bring It All Back, and the raucous crowd-driven chorus of Walk, before we strip back to the piano for the start of Seventeen and more crowd singalongs. A filthy riff and distorted vocal signals a raucous and passionate Put Your Money Where Your Mouth Is to close the show, with some slightly rusty vocals, but some truly epic screams from Nic C.

A demanding crowd stayed to secure an encore, and the band delivered Shine On and a pulsating Rip It Up to wind up the evening in style.

Jet showed they deliver a high-powered top-quality rock show, and when we know all of the songs it makes the whole thing much more enjoyable.