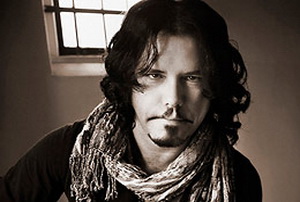 Arriving at Sydney’s iconic Basement at around 8.30pm, one could have been forgiven for thinking that they were arriving early enough to catch a decent viewing point of the stage. Alas, walking into the dimly-lit venue an hour before the scheduled start time – past rows and rows of cattle-like drunken Friday night inner city executives at the bars next door – actually saw punters encounter an already half full concert space.
Clearly, this was going to be a big night.

Thanks to a complete lack of any advertised information, the evening’s opening acts seemed to catch a lot of people unaware, including this reviewer. However, despite the complete rudeness of the audience, both performed well; Brisbane singer/songwriter Pear (aka Stephanie Barros Lees) providing the surprise performance of the night.

Diminutive and dressed in a quirky combination of strapless retro dress, black stockings and sneakers; Pear succeeded in holding the audience’s attention with her equally quirky, at times Bjork and Fiona Apple-esque tunes. Cleverly combining elements of jazz, folk and pop into her tunes, her live performance was confident and polished – accentuated by her lively mannerisms and wonderfully clear pronunciation of the lyrics.

One thing that really annoyed throughout the evening was the seeming disregard and lack of respect that the audience had for anyone on stage (it also later plagued Jeff’s set). Why would anyone pay good money to see an acoustic show only to talk loudly over the top of the performers?

Thankfully Pear’s confidence won out in the end and her excellent pitch and control – including a very jazzy vibrato in the top end – surely won her plenty of new fans. Ultimately though, the crowd was there to see Jeff Martin take the stage; which, at around 10.30pm, he did to great applause.

Without a word, Jeff and bassist/multi-instrumentalist Jay Cortez launched into ‘Morocco’, from The Armada’s debut album. There could be no questioning the benefit of decades of live experience when witnessing the marvellous cacophony these two created with little more than a 12-string Maton acoustic and electric bass. There was no awkward opening number and no mix trouble with Martin busting out of his chair with enthusiasm, his powerful baritone ringing loud and clear over the instruments.

The night would largely be what Martin referred to as “a celebration of the past” (Tea Party), but also a celebration of the present (Armada) and the future; with a couple of new numbers interspersed throughout the two hour set that are due to be recorded at the end of this tour. Certainly, the night saw fans revel in a number of classic tunes reinterpreted into the acoustic format, as though they’d always been played that way.

Martin has always been quick to recognise the rabid fan base that he acquired here through his time with Seminal Canadian group The Tea Party Many of those fans seemed to be here tonight, including one of the waitresses who walked through the crowd collecting empties, mouthing the words to such TP classics as ‘The Bazaar’, ‘Sister Awake, ‘Coming Home’ and newer Armada songs like ‘Broken, ‘A Line in the Sand’, ‘I Want You’ and ‘The Rosary’ that he says was written about his late grandmother.

It was an eventful night. Pear joined Jay and Jeff on stage for a number; clearly delighted by the opportunity. Martin introduced the acoustic Tea Party number ‘The Badger’ by dedicating it to one of his musical idols, Ray Harper; claiming he “overshadowed Dylan” and a young woman standing next to us fainted early into his set, her boyfriend carrying her to the safety of a nearby lounge – no doubt a result of waiting so long for the main event to begin.

It is doubtful that anyone would have left the Basement disappointed with the performances they witnessed on the night. However, there were probably a number of people who awoke the next day with sore heads and little recognition of the impact they had on other punter’s evenings. Martin is a force of nature. From start to finish, his voice was note perfect and he even proved that you can make unco Aussie audiences clap along in time for more than five seconds at a time. The dynamic of the set rose and fell like an angry sea only to end with a rousing, jagged rendition of ‘Black Snake Blues’ from The Armada CD as the encore.