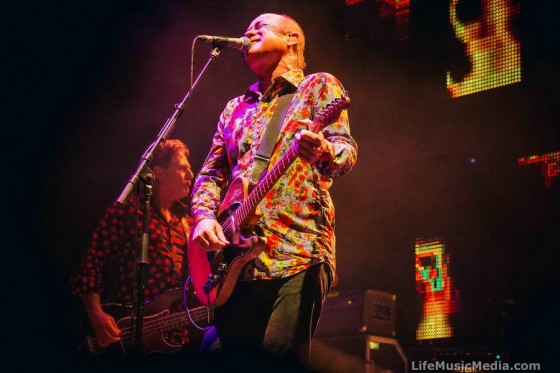 Like wow, a clear day, thirty plus degree heat, good wine, and a record 10,000 crowd. That was the setting for Bimbadgen Estate on Saturday as fans come to watch what could be described as the best eclectic line-up the area has seen in years. This event proved a smash, selling out within days of going on sale. An additional 2000 tickets were made available courtesy of a new makeshift stand. The theme for the day was interesting with 5 bands, all from different music categories including college rock to psychedelic punk and the result was spectacular.

Dressed in a hallucinogenic shirt Hoodoo Guru’s front man Dave Faulkner pushed fans to the brink on Saturday night. Opening with Bittersweet from the 85 album ‘Mars Needs Guitars’, the group moved promptly into Tojo from their debut album ‘Stoneage Romeos’. Comprising of long term members Faulkner on vocals and guitar, Richard Grossman on bass, Brad Shepherd on guitar and Mark Kingsmill on drums. The guys were energetic, feeding off the crowd. Taking pleasure introducing the crowd to their greatest hits tour, 10,000 backing vocals confirmed they had lived the songs. The stage itself looked fit for a 60’s acid trip with vivid colour and projected shapes. “I know you paid a lot of money for that seat, but it’s time you get out of it and dance” Faulkner shouted before cranking out “Right Time” much to the crowds delight. Death Defying, Castles In The Air, Axegrinder, My Girl and the 90’s smash 1000 Miles Away confirmed why this band is one of this country’s best. A brief trip off stage to return with Like Wow Wipeout and What’s My Scene and everybody left happy.

Working backwards, what about the other headliners?

It really is anything but safe to categorize Milwaukee trio the Violent Femmes? Are they country on speed? jazz, rock and even punk? Original members Gordon Gano dressed in an 80’s cricket hat. Brian Ritchie supporting an over sized bass matched by his funky glasses. Joining the originals on stage was drummer John Sparrow standing behind his kit complete with cooking Webber, yes a BBQ on stage to add further originality to the band. These guys were intense and quirky from the onset. Ritchie strummed two bars of the 83 classic Blister In The Sun much to the roar of the capacity crowd. For a band that helped define college rock in the 80’s this was a rare treat for the valley. The song list read like a greatest hits catalogue, no disappointments there. The crowd was loud and responsive to the band. Like the crowd swelling to its feet to dance, the band too was growing culminating in 7 members being on stage including brass. The song list American Music, Kiss Off, and Country Death Song would please the greatest fan and introduce a few new to this band.

Sunnyboys in the sun, could you ask for more? Lead singer Jeremy Oxley opening with Love To Rule. This power pop Sydney based band has provided lifelong fans with a glimpse of their 80’s line-up with national tours over the past couple of years. Sunnyboys t-shirts were visible throughout the crowd. The play list consisted of tracks dominated by their 80’s albums the self-titled “Sunnyboys” and their second released album “Individuals”. Crowd favourites Alone With You and Happy Man worked a treat.

Died Pretty, lead by flamboyant lead singer Ron Penno. He was joined on stage by Brett Myers, John Hoey, Chris Welsh and Steve Clark playing songs from their collection of albums there was a heavy focus on the 90’s Australian classic “Doughboy Hollow”. This set was a real treat for fans.

Three piece indie crossover band from the 80’s, Ratcat started the day. Lead singer Simon Day was in fine form from the onset. This guys sounded tight and provided the fans with an eclectic opener of songs from their four studio albums. The crowd came alive when the 91 hit Don’t Go Now echoed around the winery.

More photos and articles for A Day On The Green