There is a certain level of cringing that is associated with actors becoming musicians, and vice-versa. For the most part, the “music” feels dishonest, an attempt at another cash-grab – that feels about as genuine as a snake oil merchant.

For Guy Pearce, tonight is quite the test. Not only launching his debut album, Broken Bones, but also preparing to break down the boundaries of being pigeon-holed as an actor.

Pearce takes to The Basement stage solo, setting himself up in front of the piano – like a conductor preparing for a symphony. An excited hush from the crowd echoes around the room, the first key is struck and we are – in a word – captivated.

Pearce’s husky vocals collide with a soaring falsetto that sweeps the audience up into an almost dream-like state. And that’s just the first song. What follows is an eclectic array of smooth and whole-heartedly honest songs that seem to say more with their subtleties, than they would if Pearce screamed in our faces for an hour.

Certainly, the addition of a full-backing band and singers lends a certain atmosphere to the evening – the songs taking on new life in the live setting, serenading our souls and tugging at our heartstrings.

There is something achingly haunting, startlingly familiar and wholly honest about Pearce’s music. There is no fan-fare, bells and whistles or guitar solos; it’s simple, honest music that doesn’t require theatrics to make a point.

And that’s what makes tonight unexpected, and on the whole – perfect. 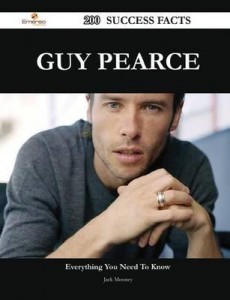 Everything You Need to Know about Guy Pearce.
An excellent Biography of Guy Pearce. This book is your ultimate resource for Guy Pearce.

Click Here for more about this Biography at Booktopia.