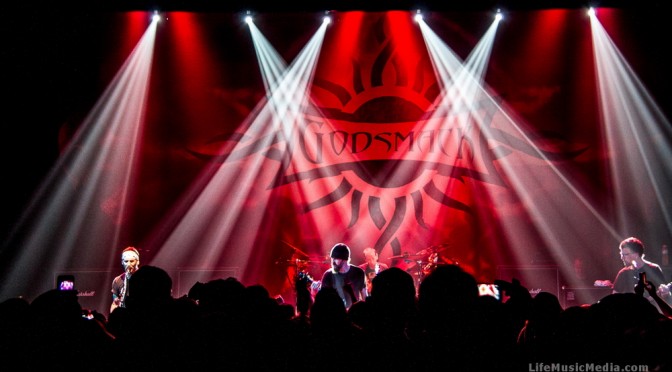 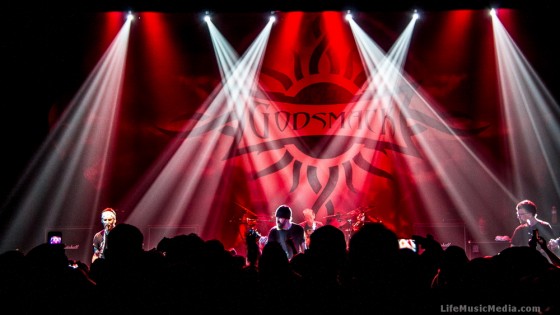 When Godsmack took to the Tivoli stage in Brisbane last night for the very first time in their 17 year career, fans were understandably excited and anything but disappointed. An eclectic audience with ages ranging from 18 to 55, styles from jeans and a t-shirt to full metal punk wear, both men and women turned up for their first opportunity to rock out to the American alternative/metal band live.

After opening with the dynamic title track from their new album “1000hp”, frontman Sully Erna energized the audience with fan favourite “Cryin’ Like a Bitch” from the 2010 album “The Oracle”. The band alternated between old school favourites and new tracks and had the audience fist pumping and jumping on command. Between songs Erna talked to the audience with vibrancy, excitement and humility at playing his first Australian tour. He taunted the audience, pumping them up and after being accidently hit in the head by a wayward flying ballet-flat shoe, he picked it up, turned to the audience and asked, “Is this Cinderella’s shoe? Cause I haven’t been laid since I got here, I’ve been looking for her…”

Drummer Tommy Stewart had the crowd cheering when he impressed fans with an extended drum solo during the band’s performance of “Straight Out Of Line” from the 2003 album “Faceless”. While Godsmack closed the show with another “Faceless” track, “I Stand Alone”, Erna closed it with a stage dive into the moshpit, leaving the fans electric with energy and ready for Papa Roach.

The crowd seemed to grow as they waited for Papa Roach. Despite seeming to be at capacity for Godsmack, more and more people flooded onto the floor, all looking for the perfect position to watch from. The crowd’s continuous chanting of the band’s name seemed to call Papa Roach on stage with a high-energy, wildly entertaining performance of “Blanket of Fear” from the 2004 album “Getting Away With Murder”. The performance was so energetic they had the crowd moving fiercely. By the end of the first song the audience was so animated you could literally see sweat flying through the air as they jumped and head-banged in time with the beat.

With a repertoire spanning 22 years and 8 original albums, Papa Roach had plenty of songs to choose from for last night’s show. The band’s choice of set list offered a cross-section view of their discography with emphasis on crowd and band favourites. Frontman Jacoby Shaddix spoke earnestly with his fans before erupting into “Scars”, (“Getting Away With Murder”) explaining it was the “song that saved this little rock ‘n roll band’s life…”

Shaddix also diffused a fight which began to break out in the moshpit, telling the men to “chill out,” and that they were “here to rock, not fight, man”. After Shaddix jokingly referred to the situation as “some eye of the tiger shit,” lead guitarist Jerry Horton began a quick cover of Survivor’s classic hit “Eye of the Tiger”, which got the crowd cheering loudly.

The elegance of the Tivoli allowed for an intimate and up-close performance, while the band’s style allowed for what felt like a personal show. Shaddix leapt off stage several times and at one point went for a walk through the audience while singing and even stopped so fans could take selfies with him.

Closing the show with crowd favourite and the song many agree shot them to fame, “Last Resort” from the 2000 album “Infest”, the exhilarating performance left the crowd cheering wildly. The band posed on stage for a group photo for anyone in the audience with their camera phones out, then disappeared backstage.

After waiting 17 years to see Godsmack, and after witnessing the intensity and magnitude of Papa Roach, happy, fulfilled and slightly intoxicated fans headed home with memories of one of the greatest shows they could have hoped to see.

www.soundwavetouring.com
CLICK HERE for our photos of the show!