Enmore the hip Sydney suburb was rammed on Sunday night – parking was a nightmare, the Duke was overflowing, and the queue to get in to the Enmore Theatre was round the block. All because a couple of 1990’s US rock bands had teamed up for a co-headlining tour, and Zaccaria Concerts & Touring had done a bang-up job of promoting and selling the shows. The Enmore was fully standing downstairs, and was packed early, with Mr Big taking to the stage around 7.45pm, and treating us to 85 minutes of flawless classic rock.

While both bands are best known for the massive hits from their acoustic AOR balladry, and some members for their work with other bands, there is a seriously competent musical pedigree and extensive back catalogue behind each of them, and in Paul Gilbert and Nuno Bettencourt we got two of the world’s best rock guitarists for the price of one!
Kicking off with Daddy, Brother, Lover, Little Boy (The Electric Drill Song), we got both Paul Gilbert and Billy Sheehan using the drills to hammer their guitars, followed by the lesser known Undertow from the 2010 What If record, and then my personal favourite Alive & Kicking from second album Lean Into It. Green Tinted Sixties Mind got the crowd more involved in the singalong, and highlighted the quality of the rare best that is a 4-part vocal harmony in the modern rock band. Matt Starr who has filled in on drums since the tragic passing of Pat Torpey showed his class with the voice as well as being a powerhouse on the kit.

There were a few songs off the new Defying Gravity album, including the sensational Everybody Needs a Little Trouble, before The Price You Pay from Bump Ahead, and then we got the flawless note-perfect virtuoso that is Paul Gilbert doing his thing! He really is extraordinary, and no wonder Nuno had expressed concern in interviews that headlining with Extreme was all very well, but he had to follow Paul Gilbert!

Wild World, Addicted to that Rush came and went, before the guys settled down for “that song” – To Be With You is a lovely ballad, sung to the rafters by the crowd, and was a fitting prelude to the brutal and frenetic Colorado Bulldog, and the melodic blues rocker Take A Walk that closed the set.

Eric Martin has perhaps lost a bit of his vocal prowess, or perhaps his voice was just tired, but Billy Sheehan is an insanely talented bassist, and so expressive in his style, that with Gilbert and Starr on the team, there is never a shortage of something exciting to watch and listen to!

Gary and Nuno are certainly the focal point of the band on stage, but bassist Pat Badger holds his own, and plays off the other two well, and newer member Kevin “KFig” Figueiredo (only since 1994) was solid as a rock behind the kit.

Nuno may be petite, but his presence onstage is huge – from the flamboyance of his guitar-playing, to the selection of hats, and his percussion part in Play which preceded the legendary and blisteringly fast solo, that was delivered to a roar from the very knowledgeable and slightly guitar-nerdy crowd.

Obviously, we got the big ballad hits Hole Hearted and More Than Words, delivered as a lovely duet with sensational harmonies from the guys, and massive backing vocals from the Enmore crowd.

Some jamming and an insane rendition of Flight of the Bumblebee by Nuno led into He Man Woman Hater, before the roof got lifted with the party rocker of Decadence Dance that ended the set…….complete with false ending and extra chorus just to make the point!

Two great bands, both playing full-length sets, for a fair price – what more could you ask! 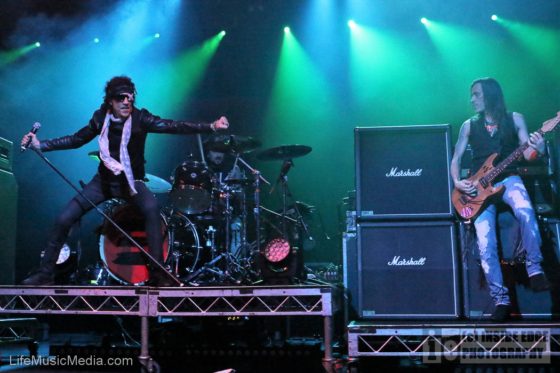