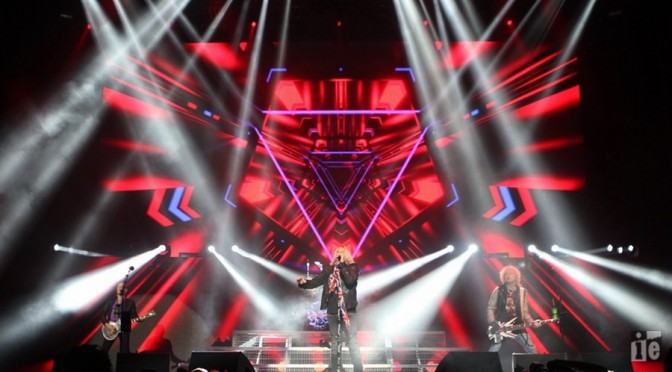 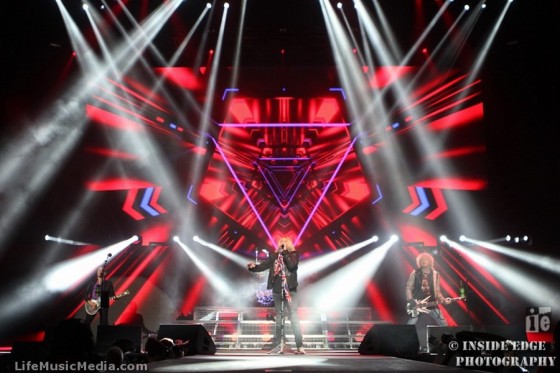 I will declare an interest from the outset – I love Def Leppard – and have been a fan since I bought their debut EP “Getcha Rocks Off” in 1978, saw them as a support band to Sammy Hagar and Ozzy among others, and then devoured everything they released through the 1980s.

An early start at Rod Laver Arena saw local stalwarts ELECTRIC MARY hit the stage for a short sharp set of bluesy classic rock songs, led by Russell “Rusty” Brown and the melodic twin guitars of Pete Robinson and Brett Wood, with the massive rhythm section of Alex Raunjak in the white suit on Bass, and Dave Porter on Drums. Great songs, delivered really tight, and with a huge sound, they generated a bit of heat in the early audience, and were gone too soon.

LIVE appeared in understated black, for their first visit to Australia with new singer Chris Shinn out front, and delivered a set of classic LIVE songs, along with a few tracks from new album “The Turn”.

Critics can pigeonhole LIVE as just another corporate rock machine living on the legacy of a couple of hugely popular albums, but they do have a discordant edginess which distinguishes them from some other bands.

The intro to “Dolphin’s Cry” pulled a great reaction from the crowd, and the song features great lyrics, lots of contrast, and a lovely solo from Chad Taylor. “Lakini’s Juice” is another classic track, followed immediately by “Lightning Crashes” with a really strong vocal performance, building each verse until the bands kicks in for the solo. Perhaps a little restrained, and with some suspicious keyboards and backing vocals that may have been on tape, but with such a strong back-catalogue to draw from. It would be good to see them do a headline set sometime!

Big dramatic stage show – lots of screens and lights – intro tapes – silhouetted figures on the stage – and we’re off with DEF LEPPARD‘s new single “Let’s Go”, and my first impression is that Joe Elliott’s voice appears stronger and clearer than ever before. “Rock Rock Till You Drop” and “Animal” follow in a rush, and I get to my seat after taking photos, to catch “Undefeated” and “Dangerous” from the new album – the latter with just classic Leppard riffing and a tasty solo from the now happy and healthy Vivien Campbell.

New tracks out of the way, it was on to the greatest hits package, with the soaring harmonies of “Love Bites”, leading into “Armageddon It” – and I’m struck by the band’s ability to take the wildly over-produced songs from “Hysteria” and “Adrenalize”, and play them live without any apparent backing tracks – just using the bass and guitars to replicate the production in a raw form.

A brilliant Queen-style version of the David Essex classic “Rock On” is followed by Joe Elliott out front on acoustic guitar doing a solo intro of “Behind Blue Eyes” and leading a crowd singalong of “Two Steps Behind”. Then it’s “Guitar……..Drums” and off into “Rocket” which again includes the insane middle-eight section portrayed by Phil Collen absolutely ripping the sounds from his guitar, and more terrific harmony vocals. One of my favourites, the instrumental “Switch 625” from “High ‘n’ Dry” is just classic 80’s rock, with extended duelling guitars and harmonised riffs and solos, building to a feedback-driven climax, and bass/drum solo to close.

“Hysteria” follows with some old movies playing tribute to the late Steve Clarke, and a slightly rushed “Let’s Get Rocked”, into “Pour Some Sugar On Me” to finish the set. Joe appeared really warmed by the response from the sell-out 10,000 crowd, thanking us for still turning up after 37 years! Brutal riffs kick off “Rock of Ages” with yet more savage soloing from Phil Collen, and then the best single they ever released – “Photograph” – brings the set to an end.

It was brilliant to see the band on such good form, so energetic onstage, and clearly loving the whole process, as well as delivering a less-polished, and therefore more honest version of their many great songs. 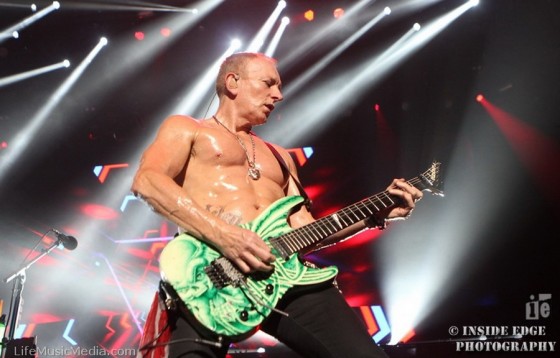