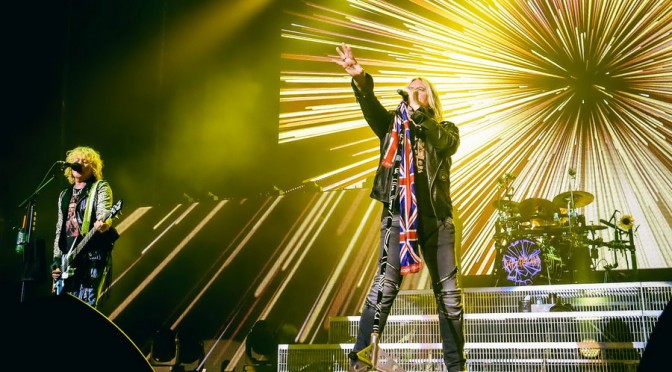 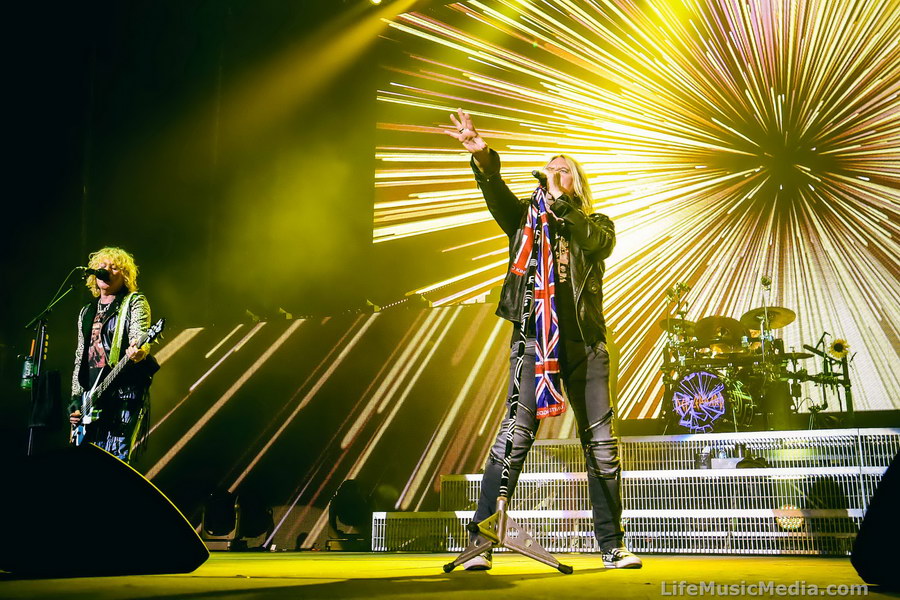 On a hot sweaty Tuesday night in Sydney two bands each responsible for some of the biggest hits in music in the past twenty years joined forces to put on one hell of a show.

First up was Pennsylvanian band, Live. Sure the band was missing lead singer Ed Kowalczyk who left the outfit in 2012 to pursue solo ventures. Enter Chris Shinn who provided the audience with a strong presence and powerful vocals. Shinn moved comfortably around the stage standing on speakers and receiving a strong response from the now growing crowd. His relationship with fellow band members appeared natural and unrehearsed this was particular evident with Chad Taylor lead guitar who shared the mike with Shinn on several occasions. Highlight, how could you go past, ‘I Alone’ or ‘Lightning Crashes’ bringing back some fantastic memories.

Enter Def Leppard with all the lights and glamor of a true 80’s rock band. With a diverse crowd on their feet from the start it was evident this band the audience have history. I first caught this band on a rainy night at Narara in 1984. Back then they showed promise but who could predict what was to come.

From the time front man Joe Elliot put a foot on the catwalk stage he effectively paid out the mortgage and owned it. Opening with ‘Let’s Go’ the band moved into full swing immediately. The band was on fire. Rick Savage on bass moved seamlessly around the stage. The combination of bare chest and pure guitar brilliance of Phil Collen and Vivian Campbell was faultless. Rick Allen on drums surely must rank in the world’s best.

“Are you ready to have a good time Sydney?” shouted Elliot in his distinctive English accent. The 17 song set list was a mixture of old and new. For me there were two key highlights. Joe Elliott leading the crowd solo and acoustic with the song ‘Two Steps Behind’. The second was hearing the band play ‘Hysteria’ and watching the historical moments of this band from over thirty years on the road.

From what I witnessed on Tuesday night with a packed house, sold out tour and fans of all ages there is room for a lot more tour history to come. Great show, excellent sound and lighting.

Let’s Go, Animal, Undefeated, Dangerous, Love Bites, Armageddon It, Rock On, Two Steps Behind, Rocket, When Love and Hate Collide, Switch 625, Hysteria, Let’s Get Rocked, Pour Some Sugar on Me

Encore:
Rock of Ages, Photograph, Kings Of The World