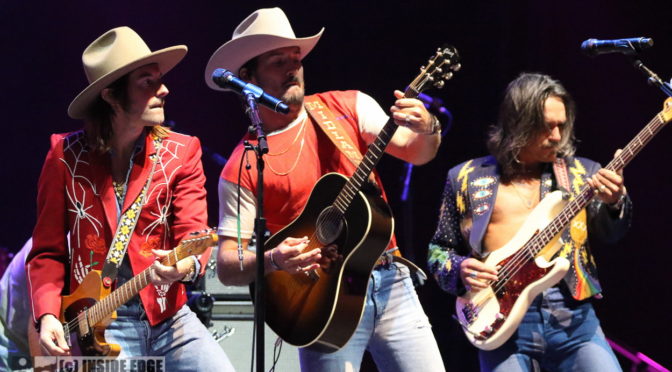 The much heralded first attempt to bring the global C2C Country music festival to Australia had been a long time coming, and with the legendary Tim McGraw as the headliner, along with a strong supporting case of overseas and local talent, was able to draw healthy crowds to the Sydney and Brisbane shows.  The format included a standard main stage at one end of the arena, with a smaller stage at the opposite end, and two stages outside the arena for bands to play during the afternoon, one of which included a bunch of stalls in a Marketplace environment.  There was also a CMA sponsored Songwriters workshop that featured Eric Paslay and Travis Collins in a traditional Nashville-style songwriters round, talking about and singing a few songs.

There will be a few learnings from the event that will no doubt see minor format changes for next year – but on the whole the organisation, production and quality of the acts should be seen as a great success – the sound was spectacular on every stage, and the event ran like clockwork!  The lighting on the main stage was a cause for comment from the photographers – with chunks of the stage in darkness for the opening acts – although there were complaints once Tim McGraw took to the stage!

The Town Square Stage and Big Entrance Stage featured a range of local and overseas acts, featuring Jody Direen, Judah Kelly, Sinead Burgess delivering solo acoustic sets, and Kaylee Bell from NZ showing her talents with loops and beat-boards to accompany her own guitar.  Andrew Swift and the Adam Eckersley Band rocked out with their bands, and Casey Barnes ripped up the main foyer to a packed crowd.  Reverie Lane showed us some great humour and two-part vocals from the girls, including Luke from Midland on guitar, and Jess Moskaluke showed her talents to a new Australian audience.

The main arena opened up around 3.30pm and saw local ladies The McClymonts deliver a superb and polished set to open up the main stage – what a trio they are, backed by their excellent band, and were a real highlight of the whole day.  First up on the ‘Spotlight Stage” was Lacy Cavalier from the USA, who delivered a strong set with her guitarist alongside her, and while a good section of the crowd could not see them live, the big screens carried the set reasonably well.

The two stages meant that there was minimal time between acts, and Eric Paslay took on the main stage with his band and reminded many of the crowd that while they may not have heard of him, they had heard many of the songs he had written for others, like our own Morgan Evans.  Hopefully he will be back in Australia before too long.

Raelynn, a blonde pocket rocket had more of a band to back her on the small stage next, and she really engaged the enthusiastic VIPs in the pit around the stage, before rising stars Midland took over the main stage with their country tinged take on the Eagles west coast 1970’s country rock – Front man Mark Wystrach is a superstar in waiting, and he threatened to cause chaos when he jumped down onto the arena floor and spent the whole song high-fiving, hand-shaking, selfie-posing and singing with various members of the audience, including heading up into the gallery!

Late addition to the bill to replace the unwell Drake White was recent YouTube country / RnB crossover artist, Blanco Brown, whose first two songs were just beautifully delivered  soul/country ballads, showing he has a real voice. Famous for The Git Up – part of the crowd was really excited, however the hit and later songs were not much more than a DJ set.  Kelsea Ballerini is an honorary Aussie, and bounded onto the main stage from under a huge graphic of angel wings – showing she has matured significantly in the past 18 months from her set at CMC Rocks – this lady is a real star, and delivered a superb set with panache, humour and a powerful voice.  Our own Travis Collins had the privilege of heading the Spotlight Stage roster, and the crowd around the stage was getting rowdy when the boys hit the stage for a full-band set.  Raucous and engaging, the band worked the crowd up with their up-tempo set, and set the scene for the main act!

The volume got cranked up, Blow blasted out of the PA and the lights went out – before the phenomenon that is the Tim McGraw machine took to the stage and ripped into the country anthem Truck Yeah – not one, not two, but three guitarists, along with bass, drums, keyboards, and fiddle/banjo virtuoso, we were hit with a wall of sound of crystal-clear quality, and a blinder of a light-show. (Sadly Tim had not allowed all the photographers to cover his set).  Southern Boys, All I Want is a Life and Something Like That powered up the crowd, and Shotgun Rider brought a climax to the blistering first part of the set.

Tim is a consummate professional onstage, working the crowd, making everyone feel that they are in their own personal show, and his band is amazing – the three guitarists trading riffs and licks throughout – occasionally Tim joins them with a fourth guitar just because……and the rhythm section is super tight.  We get a couple of old songs, including Where The Green Grass Grows, and some new songs, as well as a cover of Elton John’s Tiny Dancer, which Tim had sung with the great man at an awards show.  This was the perfect closing set for C2C – a top act putting on a class show.