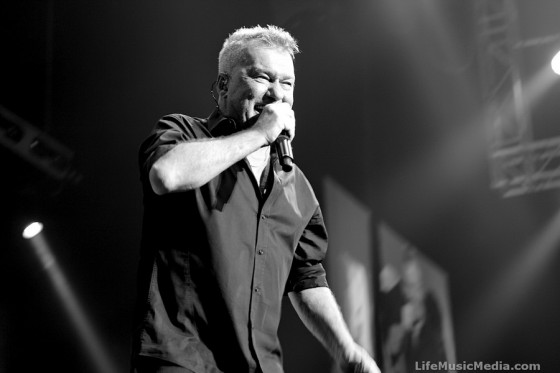 When you think of Australia, you think of sun-drenched beaches, ice-cold beers, koalas, AC/DC, Vegemite and Crocodile Dundee. We are the lucky country, and that certainly applies to the bands we’ve produced over the years; with tonight being but a mere sample of how strong the Australian rock scene was and still is.

It’s been a long time between drinks for fans of Grinspoon. Having announced an indefinite hiatus in late 2013, the band has remained resilient in taking a much-deserved break after 18 years of albums and touring.

However, it’s no surprise that the band look at ease as they take to the stage, seeming to pick up where they left off; much to the appreciation of the fans who make their way to the gig tonight (even if only for a 30 minute set).

A guest appearance from Unwritten Law’s Scott Russo (cue: bromance) during More Than You Are marks a highlight of the bands set, only cementing their place as one of the consistently best rock bands we’ve produced in the last 20 years.

Sadly, being only a seven song set – the band leave the crowd wanting more, but hanging onto a glimmer of hope that they will return to our stages again soon.

Tuesday night gigs are always going to be a tough sell – but that doesn’t seem to quash the spirits of Cold Chisel as they take to the stage with an infectious confidence that seems to lift the room.

The passionate screams of “Barnsey!” from the crowd, only add to the unmistakable energy; as they launch into a set list that touches on each era of their career.

Letter To Alan, Choirgirl, Cheap Wine and When the War is Over take on a new life in front of the impressive crowd, the bands energy never seeming to falter throughout their epic two-plus hour set.

Certainly, at gigs like these, you tend to hear people throw the word ‘icon’ around a lot, but in the case of Cold Chisel, it’s a fair use of the word.

Because nothing says ‘Australian Icon’ like hearing Barnsey rip into a chorus of Khe Sanh, and everyone know the words.