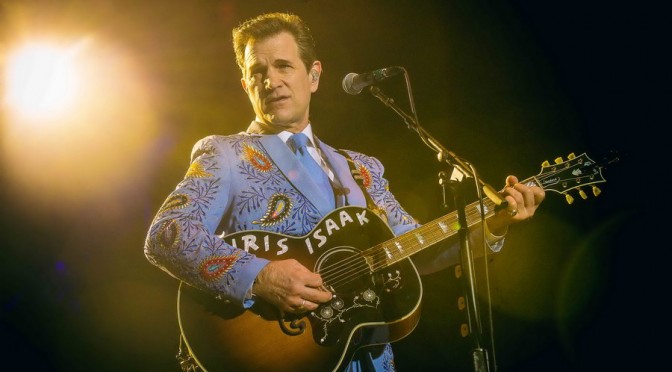 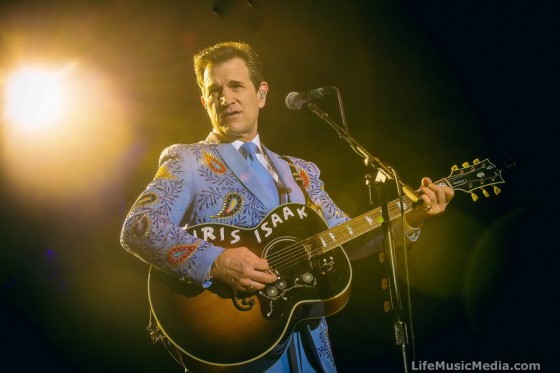 It was a perfect night for the final a day on the green at Bimbadgen on Saturday. Warm afternoon culminating with a cool evening. At 7.00pm Chris Isaak dressed in his famous 15 kilogram blue mirrored suit took to the stage and shortly after owned it. The 59 year old was in fine form. “I hope I am in the right place dressed like this or I need to go ice skating”, The Californian crooner remains as charming as he is talented. Introducing the audience to an array of hits and covers during his almost 2 hour set.

Opening the night with “Don’t Break My Heart”, the band moved quickly into “Somebody’s Crying” including the substituted lyrics “Somebody’s drinking” well received by the crowd, ironic given Isaak does not drink. The hits came think and fast with “Wicked Game” echoing around the winery, a truly memorable moment.

Only a few songs into the set Isaak decided to get mobile during “Kiss Me Like a Stranger”, moving down the stairs to meet and greet the fans. So comfortable even in a foreign setting Isaak stopped along the way to have a photograph with some happy female fans.

Like a funky bar band that got too good Silvertone were dressed in classy suits, and lead by Isaak’s life time friend Kenny Dale Johnson, the band was at home from the first song. Isaak and Johnston traded jokes like a well versed comedy team throughout the evening. At one point there was even reference to Australia’s own Slim Dusty who surely would have turned in his grave hearing his anthem renamed the “Bar With No Beer”.

Holding the audience in the palm of his hand Isaak introduced the crowd to the Elvis Presley classic “Can’t Help Falling In Love”, engaging with the audience saying, “This song is for people sitting next to that special person, if you are cuddling at the start and not kissing by the end, then you just ain’t tryin”

“Sometimes you just have to sing whatever you feel like singing , detouring off the setlist, life’s to short for rules” so true, a philosophy that is no doubt practiced every night with this band. Although at times chaotic nothing was missed from “Blue Hotel” to “Baby Did A Bad Bad Thing” the audience got both barrels. Following an encore and a final goodbye the curtain went down on yet another successful and well run season.

A big shout out to the supports. Thirsty Merc were back with force opening the day. Richard Clapton took us back to the beaches of the 70’s when times were just so different. Finally James Reyne warmed up the crowd with an hour set of solo and Australian Crawl classics. The perfect mixture for concert fans.

More photos and articles for A Day On The Green