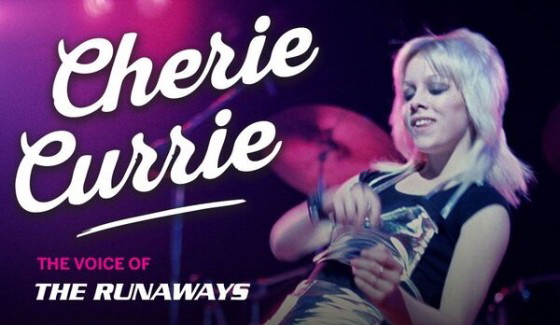 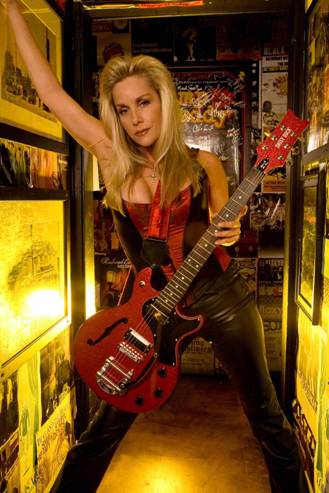 Tonight I stood amidst a small, intimate, eager crowd at the Triffid Bar in Brisbane’s Newstead, waiting for Rock and Roll icon, former Runaways lead singer and soloist, Cherie Currie to take the stage. For the first time in her 40 year career, Currie told the audience she was about to full-fill a life-long dream of hers; visiting and performing in Australia. Once described as “the lost daughter of Iggy Pop and Brigitte Bardot,” (Bomp Magazine 1976) Currie showed us tonight that she still has the same beauty and unprecedented swagger of her 15 year old self.

Welcomed with cheers and screams and cries, Currie kicked off the show with “American Nights” (1976 The Runaways – The Runaways), a song from her then band’s debut album. She commanded the stage with the same presence we’ve seen in footage of her at the peak of her career, sang with a voice that has somehow got even better over time, and smiled that one of a kind Cherie Currie smile. It was a moment few of us had ever expected we would have the chance to see, and the audience was in awe.

Second song on the set list was a smashing rendition of Runaways hit “Rock-n-Roll” (Live in Japan 1977), followed by an original Currie wrote for the soundtrack of a forthcoming documentary on Suzi Quatro. Currie explained the history of the song, describing an incredible moment in her career when her idol joined her onstage in London to perform the track. “It was the most incredible moment,” Currie gushed, “I didn’t know it was happening, then suddenly out walks Suzi Quatro with her bass guitar! I forgot the lyrics after that!!” Currie spoke to the crowd honestly, unabashedly and with sincerity, capturing the attention of the entire room. While the less than packed theatre was surprising, it did allow for a more relaxed setting, facilitating a back and forth between the audience and stage. Currie took advantage of this, interacting with the crowd as much as possible, creating a once in a lifetime experience for a room which seemed to be filled with die-hard Currie fans.

Currie then thrilled the audience with a newer track, “Dear Mum,” a fast, heavy, punky song originally written and recorded with German rock/glam metal supergroup Shameless (Beautiful Disaster, 2013). She continued to hype up the audience with a strong and gritty cover of her ‘favourite,’ Suzi Quatro’s, “Roxy Roller” (Originally Sweeney Todd – Sweeney Todd, 1975).

Currie knew what else the crowd wanted to hear, following up with five Runaways hits, “Is It Day Or Night,” (The Runaways 1976) “Heart Beat”, “Queens of Noise”, “California Paradise” (Queens of Noise, 1977).

The standout performance of the evening was Currie’s hauntingly beautiful, emotional and vocally spectacular cover of David Bowie’s smash-hit “Lady Grinning Soul” (Aladdin Sane, 1973), which left the crowd speechless and brought a tear to the performer’s eye as she paid tribute to the late Bowie. This wasn’t Currie’s only display of emotion, later shedding a happy tear while discussing her fans, her friends and her chance to perform ‘Down Under’.

But of course, it wouldn’t be a Cherie Currie show without her signature song, “Cherry Bomb” (The Runaways 1976), and the audience was waiting for it all night, Currie saving it for her final track. The entire room erupted in cheers and every person there sang along. Currie took her final bow, said her final goodbye, and the greatest performance we could have hoped to see, was over. As the stage lights dimmed and the buzz of the crowd became a calmer hum, no-one was left disappointed. Currie has perfected her craft and tonight reminded us all that while she may have left the spotlight, she certainly never left music. Tonight’s performance was a rare gem, the kind of performance you can’t believe you had the chance to be there for, the kind of performance you can’t describe in words. She even took the time to stop as she was leaving to sign autographs for a few lucky and persistent fans. Tonight thrilling life-long fans in their 60’s to younger fans in their 20’s, Cherie Currie left her mark on Brisbane, and on our hearts.

Read Our Interview with Cherie Currie