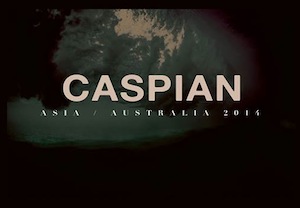 It’s a gorgeous Thursday evening in the Queensland capital, the smell of the rain still hanging in the crisp air after an earlier downpour. Following a brisk walk to the Tempo, we are met with a killer blast of noise: that’s Hope Drone, eagerly conforming to their moniker by dousing the venue with bucketfuls of post-black metal (yep – everything is “post” these days) and death growls. It’s not all Cookie Monster-esque bluster, though – the quartet aren’t shy on melody and have their cleans and atmospherics down pat.

Although Sydneysiders Meniscus are considerably easier on the ear than the local support, their minimalist brand of instrumental rock has long won them loyal groovers (if one were to judge by the crowd response). Familiar with Brisbane venues through a series of high-profile support gigs, the trio bring to mind God Is An Astronaut with the synths cut to a bare minimum. New track DVT is one of a clutch of reverberating, bass-heavy nuggets.

It took US post-rock stalwarts Caspian quite a while to come down under; yours truly recalls trying to urge them to play Australian dates through Twitter as far back as 2009. Tonight, Brisbane hosts the second date of the long-awaited tour – twinned with the local release of the combo’s latest opus Waking Season.

Formed during the genre’s mid-‘00s heyday, Caspian have since carved out and stuck to a distinctive sonic domain with several trademarks – graceful extended interludes, busy bass lines, monolithic codas – yet also got progressively heavier in a very earthy way. True to form, the siren-like Fire Made Flesh is an incendiary set opener, the Massachusetts quintet unleashing a mighty three-guitar assault. From then on, it’s a masterclass in ‘dude music’…

That’s right, this is stone-cold dude music. Although there are a few statuette-like ‘heavy metal girlfriends’ in attendance, Caspian’s live oeuvre is testosterone-soaked through and through – the entirely-bearded and tattooed band even look like the majority of their audience. They’re regular blokes, too, with band spokesman and occasional vocalist Philip Jamieson upping the bonhomie by regaling the crowd with a story about mingling with koalas (“…like tiny old men with massive f***ing… what do you call ’em… talons. Epic.”) during the obligatory Lone Pine visit.

Despite lacking the ethereal glide of Sigur Ros, Explosions In The Sky’s delicacy or Mono’s classical-inspired grandeur, Caspian still take us places on staples Malacoda, ASA and The Raven. Dedicated to the tour manager’s recent betrothal, career highpoint Sycamore is a valedictory finale, epitomising everything quality post-rock is about: a simple yet affecting lullaby-like motif, serene swells and a gradual buildup leading to an explosive sonic climax. Further up, further in.