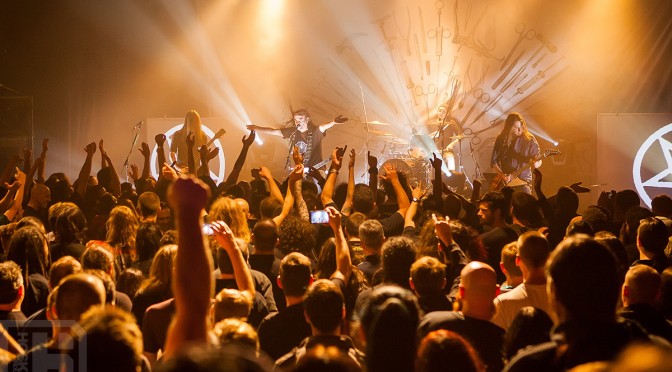 Words and Pics by Ben Hosking

Since their formation in the mid 1980s, UK’s Carcass has been at the forefront of the death metal movement. Even during the years of their break up in the mid-’90s through to their reformation in 2007, no other bands in the genre came close to matching the forward thinking, cutting edge metal they created on classic albums like Heartwork and Swansong.

So, it was no surprise that Sydney’s Metro Theatre should be near capacity for the band’s first tour here in over five years. Even Canberra’s Tortured played a punishing barrage of brutal death riffs to a significant crowd – although many were waiting patiently in the line up for the merch stand, with the line stretching out past the bar!

By the time Jeff Walker, Bill Steer and newer members Daniel Wilding (drums) and Ben Ash (guitar) take to the stage, the venue is a hot mass of bodies of all ages – fans of Carcass MkI and newer fans who weren’t around for the first onslaught. They rip right into ‘Buried Dreams’ from the Heartwork album and the punters lose their minds, trying as they might to sing both the words and the riffs.

The band pulls out tracks from their back catalogue that undeniably get the largest reaction, but they don’t shy away from playing a stack of songs from their new album Surgical Steel, including ‘Noncompliance to ASTM F 899-12 Standard’, ‘ The Granulating Dark Satanic Mills’, ‘Unfit for Human Consumption’ and a medley of ‘A Congealed Clot of Blood’ and ‘Cadaver Pouch Conveyor System’. Such is their confidence in the new material and the band performing it.

Carcass is fish-arse tight tonight, despite the current line-up being a little over 12 months old. Frontman Walker cracks jokes and witty one-liners between the brutality, even poking fun at Australia’s convict past and guitarist Bill Steers’s ex-wife. The mix is clear and precise, which is just as well as Steer and Ash trade of numerous dual guitar melodies throughout the set that would have been easily lost otherwise – not to mention the crushing riffage that have made the and such an icon of the scene.