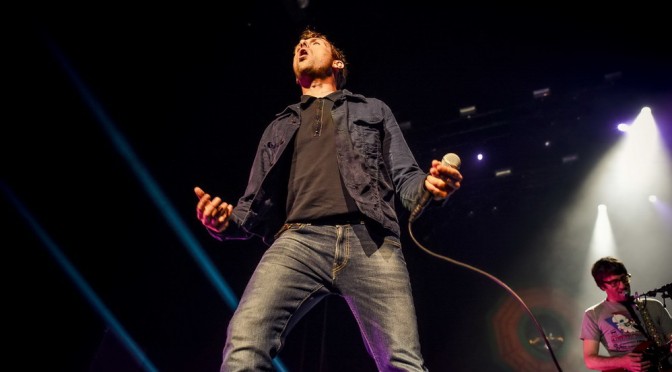 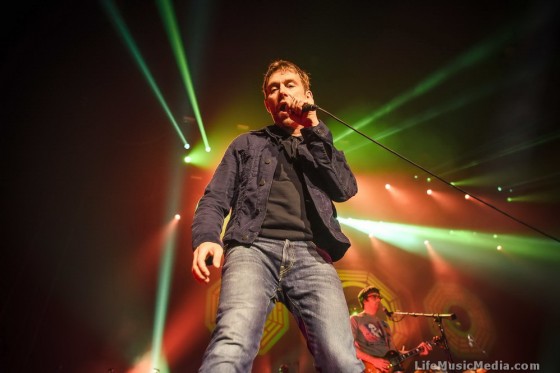 Having grown up in the 90’s on a diet of Blur I have been keen for months to finally catch the original line up. I, like a lot of fans had been teased and then bitterly disappointed after the confirmation and cancellation of their Big Day Out shows in 2014. On Saturday night in Sydney the original four consisting of Damon Albarn, Graham Coxon, Alex James and Dave Rowntree finally took the stage to no less than ten thousand adoring fans. The breakup of the crowd was interesting. Obviously there was a strong English influence but most punters ranged from their mid 50’s up to and including the very young.

Touring on the back of their eighth studio album ‘The Magic Whip’ the band took the stage armed with four backup singers, percussion and brass. At one point eleven musician’s graced the stage complementing the four. Pumped and obviously ready for action lead singer Damien Albarn commanded the stage. “Are you ready” signalling to the packed pit of adoring fans. Opening with ‘Go out’ from the new album the audience was loud and alive from the very first beat. Moving around like he owned the stage Albarn took numerous opportunities to get up and close with the audience leaning into the crowd from carefully positioned extensions to the stage. ‘There’s No Other Way’ from the 91 debut album ‘Leisure’ sent the audience into a frenzy before ‘Lonesome Street’ again from the new album was introduced. Albarn who at times looked more like a water boy throwing bottles of water to his loyal disciples continued to move freely around the stage. In a day and age where the cordless microphone is part of every artists kit Albarn insisted on an old fashioned cord which keep staff busy ensuring no one got tangled

All four musicians demonstrated how intricate each member is to this well-polished machine. Apart from the dominance of Albarn you really enjoyed the individual brilliance of Coxon on guitar, Rowntree’s beat and James, who I must say looked more like he just came of Bondi beach dressed in shorts and no shoes bass playing. In total the twenty two song set featured six songs from the new album. All were well received none more than ‘Ghostship’ or ‘Ong Ong’

For me personally, seeing Albarn pick up an acoustic guitar and play ‘Beetlebum’ and ‘Coffee & TV’ was a true highlight. This was closely followed by Rowntree’s drumming on ‘Girls & Boys’. At times if you closed your eyes you could get a true English feel with the crowd. From a packed standing area to the classic sing along especially in ‘Parklife’ and the commercially over exposed ‘Song 2’.

The band finished it’s 18 song main set with ‘This Is Low’ only to return for a 4 song encore culminating with ‘The Universal’ Overall a powerhouse set introducing fans new and old to the new album and taking us back to a time when this four piece ruled the airwaves. Given the time it took to get here hopefully it will not be the last time Australia gets to see these guys live on stage.

Go out, There’s no other way, Lonesome street, Badhead, Ghost ship, Coffee & TV, Out of time, Beetlebum, Thought I was a spaceman, Trim trab, My terracotta heart, Tender, Trouble in the message centre, Parklife, Ong Ong, Song 2, Pyongyang, To the end, This is low