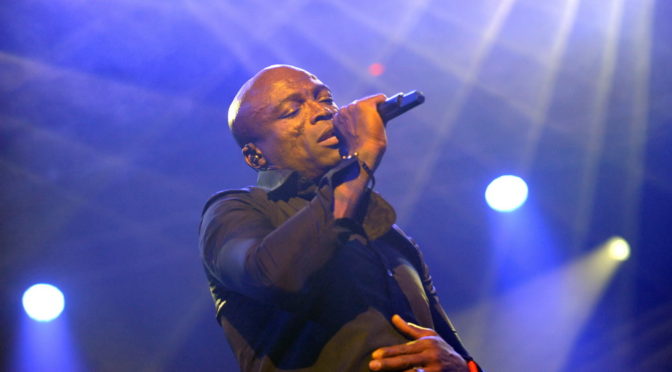 Boomerang Festival finale
Although not mentioned on the schedule hundreds of people gathered around the Boomerang Festival dance grounds to celebrate three brilliant days of dancing, weaving, singing, healing and storytelling at this precinct. All the artists from over the three days took turns to once again share their unique cultural expression culminating in a big combined dance off at the end. Spirits soared as everyone united in celebrating local hosts of the festival the Arakwal and Bundjalung Peoples and all the guests visiting from other tribes and nations.

This followed on from a captivating performance by Yirrmal who started his set by acknowledging himself to the Traditional Owners of the area by singing in Yolgnu language. His music has developed since his appearance at Bluesfest last year where it was just him and his guitar. This year he had a full rock band Yirrmal and the Miliyawutj and also invited several guest artists to join him. Highlights included a song where Jeff Lang came on stage to play lead guitar and Yirrmal’s new song about the law of the land called Spirit of Place which will be on his album due for release later this year. Towards the end of the set Sorong Samarai arrived with their log drums and vibrant energy collaborating with Yirrmal and drummer Dimathaya Burrawanga to create a rhythmic sensation, raising awareness of West Papuan occupation by Indonesia and West Paupua’s quest for independence.

While it was the New Power Generation’s task to celebrate the life and work of Prince over previous days, Seu Jorge had the honour of commemorating the music of David Bowie. Hailing form Brazil, Seu Jorge sang Bowie’s popular hits in Portuguese. His beautiful smooth, silky voice and fireside style of guitar made this feel like a gathering of friends. The audience perhaps a little too relaxed forgot that people actually pay money to come to a festival to hear music and it was disappointing that so many people chose to chat loudly making it pretty hard to hear this man’s exceptional voice. At the end of each song people clapped and cheered wildly, especially the Brazilians in the audience proudly holding up their flag, so perhaps people were listening after all.

Reality TV showed its influence as the largest crowd for the festival so far gathered to see Seal at the Crossroads. This man is all class and really knows stage craft. Starting of with classic songs off his recent album ‘Standards’, Seal in Frank Sinatra style worked with the band including trumpets, clarinets and saxophones, worked the camera’s filming him and worked the crowd. Constantly aware of himself, the people he was working with and the people he was working for, but he made it look effortless. Moving on to his popular hits and dance tunes Seal had the audience absolutely enraptured. A great vibe spread across the Mojo with people dancing, cheering and bearing the biggest smiles. Appreciated by other artists performing the festival Michael Franti and Ziek McCarter from Con Brio were down the front enjoying this exceptional show.

John Butler Trio, always a crowd favourite, pulled a massive crowd to the Mojo to headline the evening. Touring with a new format band including two extra members, they created a bigger and better sound ensuring that older songs sounded fresh. Seizing the opportunity while everyone is feeling funked up and grooving to much loved JBT songs, John Butler got serious for a minute and said “Coal has had its time. We need to give renewables everything we’ve got now. We must stop this mine. If we allow Adani to go ahead, the mine will not only be one of the world’s largest, it will be one of our generation’s greatest regrets. We owe it our children, and their children’s children, to make sure this environmentally reckless mine never sees the light of day”. He then invited Traditional Owner of the land on which the mine is proposed to be situated – Adrian Burragubba of the Wangan and Jagalingou people to speak. Adrian spoke passionately about how he and his people are fighting to stop the Adani mine being built on their sacred lands and the devastation that will occur to the sensitive ecosystems of Central Queensland if this mega mine is allowed to happen. Whilst this was happening festival performers including Michael Franti, Mia Dyson, Ziggy Alberts, William Crighton, Leesa Jentz and Jules Parker (Hussy Hicks), Tay Oskee, Steve Smyth, Lukas Nelson, Sarah Howells and Emma Bosworth held up a sign that stretched across the stage with #StopAdani CORAL NOT COAL written across it.

The spirit of the land was well represented during this forth day of Bluesfest. It was heart warming to see people listening to Traditional Owners of the land and uniting over a desire for greater respect for country. As day five comes in to focus there is still much joy to be had with artist like Harry Manx, Chic featuring Nile Rodgers, Morcheeba and Michael Franti and Spearhead on the menu for today and who can resist the opportunity to say ‘Hello’ to Lionel Ritchie.