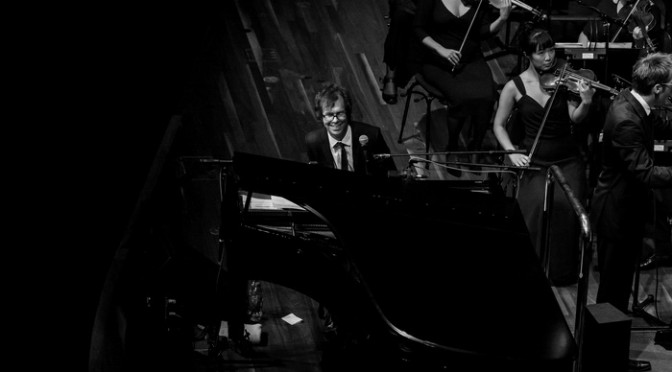 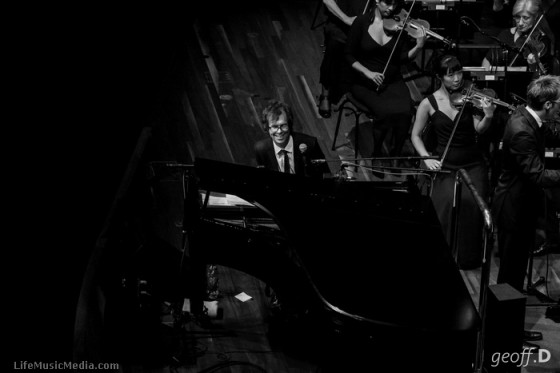 Members of the Melbourne Symphony Orchestra sit patiently in wait as a bout of applause commences for conductor Nicholas Buc to take the stage, at this point you can tell the crowd is getting excited. Suddenly a rapturous applause echoes throughout Hamer Hall and a sharply suited Ben Folds walks out onto stage.

With a quick wave and bow, there was no wasting time for Ben. The orchestra had already plunged straight into Effington and the opening lyrics “If there’s a God, he’s laughing at us” seemed so utterly fitting to start off this night.

Here we had a man, who has made a name for himself writing witty and humorous 4 minute pop songs, playing his back catalogue with un-arguably some of the most talented classically trained musicians to grace this reviewers earlobes. And to be blunt it sounded like bliss.

Ben’s energy and charisma shone brightly through the first half of his set, with the symphony orchestra adding a cinematic flair to Bens 26 minute orchestral piece Concerto for Piano & Orchestra (2nd & 3rd Movements). Watching the audience’s confusion during the ringing telephone arrangement was definitely amusing and it was great to see members of the orchestra playing along, looking around as if trying to spot the ringing phone.

To conclude the first half of the set, Ben performed a surprisingly early rendition of Rock this Bitch. For those who don’t know, ever since being heckled at a show, Ben has started a tradition where he composes a song on stage based on whatever topic the audience member who yells out the magic phrase suggests. After some quick googling by the MSO office staff about “learning to speak Spanish” poems, Ben proceeds to construct his arrangement instructing the orchestra one instrument at a time.

You have to appreciate the skill of both Ben and the MSO who were able to create a spontaneous piece together on stage, in the matter of minutes.

After a brief intermission Ben and his “band” for the night, go head first into personal favourite Zak and Sara. This part of the show is also where Ben calls for more people to appreciate and get involved with live orchestral music. Fold’s really has a passion for the Arts and it shows as he tries to convince his audience of the greatness of real musicians (ala Tchaikovsky, Strauss). He even goes as far to proclaim to the youth in the audience that “Taking someone to the orchestra will get you laid, it shows your cool”.

Whilst humorous in context, his musings actually make you realise the need for young music enthusiasts to embrace classical music. Following this speech he manages to show his audience in person, just how powerful collaborative music can be. To recreate the angelic “Ahhh Ahhhhs” of track Not the Same, Ben steps away from his piano for the first time in the night. It’s here that with raised arms he conducts both sides of the auditorium in perfect unison, to create what can only be described as a surreal harmony of stranger’s voices.

The second half of the set was filled with what could be described as hits with Ben triumphing through Angry Dwarf and leading a somewhat grand rendition of crowd favourite Brick, which really showcases how well the MSO can play a diverse range of music.

All in all the real superstars of the night however were the men and woman of the MSO, who as Ben humorously described it play these “wet t-shirt nights’ just to be able to showcase the extraordinary talent that each and everyone of them holds.

It’s clear that Ben enjoys playing these shows to garner interest for the classical arts and, if anything, tonight’s show served as a launching point for many people to experience orchestral arrangements. It did leave me wondering however, exactly how many people will really come back to see these talented musicians play to a different repertoire.

One thing’s for certain though. I’ll definitely be back for more.