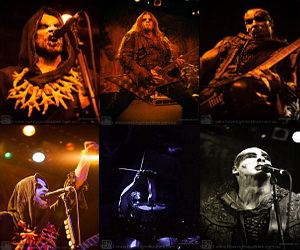 Having witnessed Poland’s blackened death metal legends Behemoth slay everyone in attendance on their Sydney date of their last Australian tour in 2010, you can bet we were more than a little excited when we learned of their upcoming 2013 tour dates. Fast forward to Saturday October 26 and we arrive at Sydney Uni’s Manning Bar to find that several hundred other excited Behemoth fans were already lining out the door and around the corner.

First up on tonight’s three-band line-up is Sydney’s own Exekute; a young death metal group that clearly has a bright future if tonight’s tight performance is anything to go by. While lacking a little in terms of stage presence, the band more than makes up for the short fall with a barrage of rapid fire, brutal riffs and plenty in the audience seem already very familiar with their tunes.

Touring nationally with Behemoth is Italy’s Hour of Penance who is next on stage, upping the ante in terms of presence and brutality, even if the mix leaves things sounding a little one dimensional.

Guitarist Giulio Moschini whips more windmills than your typical Dutch flour mill and singer Paolo Pieri turns out to be the second of three diminutive vocalists tonight who prove good things come in small packages, packing a mighty growl that gets the crowd fist-pumping for more.

Despite packing out the Metro Theatre on their last tour, Behemoth chose Sydney’s Manning Bar for this year’s satanic recruitment drive. By the time the Polish four-piece take to the stage (around 10-minutes early by our estimation, proving that being evil doesn’t mean you’re more likely to be tardy) the Manning Bar is almost full and the smell of incense burning on the stage helps set a more mystical mood.

Dressed in tattered, hooded robes, Behemoth launch into a powerful rendition of ‘Ov Fire and the Void’, stalking around the stage in full regalia, glaring at the audience as if possessed, never blinking – not once. Then it’s into ‘Demigod’ and classic track ‘Moonspell Rites’. By this stage the audience is losing its mind, in half trance from the hypnotising performance and half hysterics from the brutal performance screaming from the small Manning Bar stage.

Tonight proves to be one for the finger-style bassists, with man-mountain Orion deftly handling the staccato riffing of the fast sections despite never looking down to see what he’s doing. We’d love to see an Orion side project with him as frontman. What a growl.

Cloaked for the entirety of tonight’s performance, frontman Nergal wears a necklace of chicken feet. We’re not sure whether they’re real or not, but it could explain the need for burning incense. Indeed, so intimate is the venue that we’re close enough to the band to smell their leather stage clothes. It all makes for a truly surreal, compressed experience that we’re all of tonight’s punters will not soon forget.

Having only recently won a well-publicised battle with Leukaemia, Nergal has lost none of his fire. If anything, he may be even more angry and aggressive tonight than in 2010. Standouts like ‘Christians to the Lions’, ‘At the Left Hand of God’ and ‘Slaves Shall Serve’ all

leave the crowd breathless and sweating. With a solid cross section of tracks from across the band’s career, it also leaves us all wondering what Behemoth’s new album will be like when it drops in 2014.

Until then, it’s out into the cool Spring air, having witnessed one of the best nights of extreme metal Sydney is likely to see for the next 12 months, at least.