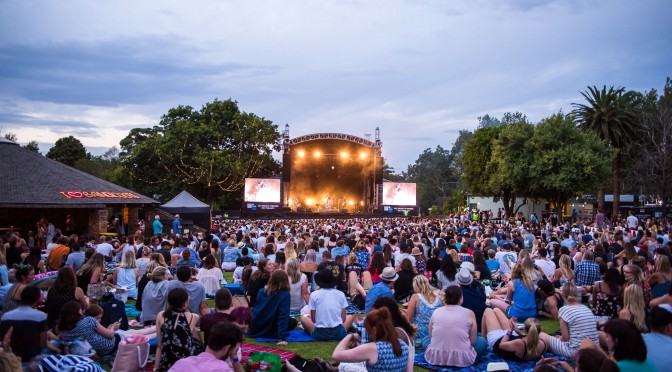 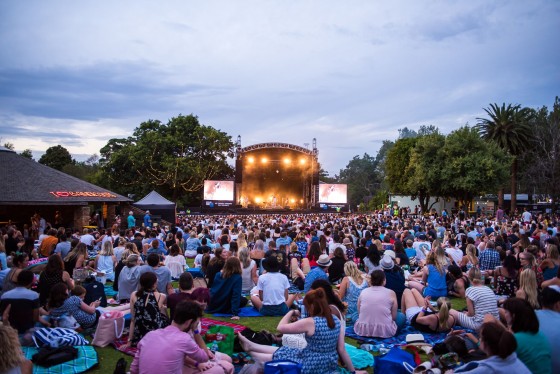 When times are tough, music is rightly a place to turn to seek solace. It mends a broken heart, it eases the pain of loss and it provides guidance through uncertainly. It’s fitting then that the salve for a broken and hurt world might also lay in the skilful hands of a musician. Rockers provide impetus and courage, while rap and hip hop drops truth after truth, and folk singers give poetic sense.

And there’s certainly a place for outright pop fun, if for nothing more sophisticated than an excuse to slap on a wide-eyed smile and jump around like a silly person for a couple of hours. Cue the country’s finest purveyors of blissful pop Ball Park Music, and you’ve got yourself a recipe for a forgetting the trials of the world for the next little while.

The Jungle Giants are a boon for spangled jangle pop, and warm up the picnic rug crowd superbly. The heights of the euphoria to come are glimpsed in the waning warmth of the last dregs of the sunshine, with toe-tapping rhythmic layering of Skin to Bone and She’s a Riot peg them rightly as the sound of an Australian summer.

BPM’s 2016 album Every Night The Same Dream threw a cat amongst the pigeons by filling their aural party balloons full of helium and letting them float towards the stars. Taking a Tame Impala-eque diversion via the psychedelic heavens, and it takes the gig there straight away with an exploration of album opener Feelings where guitarist Dean Hanson flits and ebbs around Paul Furness’ galactic keys. Jen Boyce’s bass filters through a crunching effects box, while the Sam Cromack’s vocals take on a ghostly quality, devoid of kitsch hooks.

It’s ethereal and wonderful, and allows just a touch of escapism to the galaxy, before the band wrenches you back to earth, plants a mawkish kiss smack on the lips and leads you back into the party with the anthems its famous for. The new baton-takers of the famed Brisbane striped sunlight sound are in full flight – Everything Is Shit, Except My Friendship With You and Literally Baby are set highlights, while the life-affirming IFLY and It’s Nice To Be Alive are crowd-lungbusters.

And while the set bangers are a known force in the Australian music scene, it’s the soaring otherworldly departures from its new album which truly excite. While there are juxtapositions, there’s a natural progression and maturity to the newer works. Whipping Boy is angular and lilting, while Nihilist Party Anthem takes on a bombastic quality in the live setting.

However, it’s an epic 10-minute long set closer Pariah truly puts a clear statement of the bands intent and encapsulates the moment. The song rolls and tumbles through peaks and valleys of instrumentation, before crashing to a close. It’s otherworldly and sublime, and the most perfect balm to the craziness of the outside world.