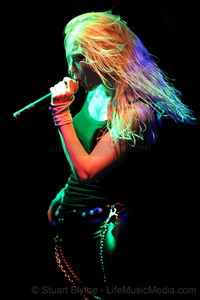 Having spoken with Michael Amott re their most recent Album launch and subsequent tour schedule only last month, I can’t wait to see one of today’s most sought after guitarists in action!

Just 10 minutes after doors opened at the venue, we hear the drum beats blast into the night air as the building we’re in and those surrounding begin to vibrate in time with the pressing percussion seeping out through the walls of Brisbane’s Hi Fi Bar; a whole block away!

My heart misses a beat, and my conscious won’t forgive me if I miss ANY of tonight’s gig, so off we run. We’re greeted at the door by an almost empty line up, all the smart kids got inside a while ago. A sea of black awaits, a room full of metal heads all wearing their favorite bands most recent album cover, pressed on casual tee’s and worn over classic ink….. it doesn’t get any more metal than this!

Winds of Plaque are into their third song or so, and as I start to takes notes, my eyes are drawn from notepad to stage. Jonathan Cooke, aka “Johnny Plague” has the vocal depth of a wild lion, his deep growls spreads ripples through audience like a rock thrown into a pool of water. The Nick and Nick duo on guitars (Nick Eash / Nick Piunno) works as dynamite, like sparks flying from flint to kindling. Their total stage presence is strong and decisive, passionate and powerful. Johnny delights in the fact that a circle pit may just be opening up beneath his feet and so do I! It’s also a night for the ladies of metal; touring keyboardist Lisa Marx (reportedly replacing the last keyboardist who left the band in August this year) has been taping away thought the set. Her contribution to the bands sound becomes more obviously prominent to me as my ears sit up and take note. She fills sections of the songs with eerie but inspiring gothic effects played in minor keys, with frequent complementing melodies. The effects she uses are perfectly fitting with the genre; she’s managed to replicate the sound of an ancient church organ in parts, and it sounds fantastic. Johnny does well to maintain his prominence throughout. Minimal lighting apparent, but certainly not missed, W.O.P accentuate their own music. A band still finding a solid sustainable sound, they’re fantastic to watch.

Between sets people aren’t moving too much, no one seems overly eager to be outside in a cloud of cigarette smoke, and quite frankly neither do I. Why would I leave the venue now on chance of missing any of the next band, or any of the atmosphere inside? Enjoying music from this genre can at times be somewhat lonely, as real appreciation for what these people do musically, comes with an acquired taste. The vibe tonight is just so. Those here are content to hang out and socialize with others akin to their own musical callings; an unspoken brotherhood of sorts.

For a band that’s come and gone throughout a good part of the last two decades, making, breaking and reforming their sound during the construction of numerous albums, Suffocation do not leave us wanting on the eve of the show. Without the majority of the original band members and since rejoining with a new line up in 2002, they’ve carved they’re way back onto the metal podium. Or did they ever really leave?

I’m almost at a loss for words when it comes to accurately describing the intensity of their music. Their sound is saturating, precise and powerful, with layers of subtle rhythms, lying discretely under a wave of the rumble that becomes Frank Mullens’ devilish voice, his screams still deep with resonance. Playing a selection of their older songs, and a couple from the 2009 release “Blood Oath”, the set builds from the blasting bass intro before the first song to the epic riffs and satanic surge of instruments that sustain Suffocation for the remainder of the set. Guitarists Terrence and Guy look like they’re from hell itself… pulling off some classic traditional metal solo’s, the perfect accompaniment to drummer Mike Smiths fine art of meshing creative fills with insane blast beats.

Reminding me of a character from Romper Stomper, Mullens takes the time between final songs to talk to the crowd about the “imminent” end of the world in 2012. Even going as far as to suggest we should all go out with a bang.. so get ya gun license and stock up those bullets! Obviously making light of an uncertain situation, it’s the music we want and we damn well got what we came for. As he attempts to point out… if you know you’re going to die… have fun doing it. Same with anything else in your life and it’s a great point to make. They say the usual good bye, farewell and thanks for having us… and return back stage. Arch Enemy are getting closer…

Until I find them upon me! Rippin riffin and racin, they start their set to cheers and screams from every man in the audience complementing Angela Gossow on her climb to metal stardom. She opens with a piercing high shriek comparative to that of a mystical banshee and doesn’t drop it off at all. Seeing a female on stage in such a niche leading role, makes me completely warm inside. Simply attired in black leather pants and black singlet, her performance, from the minute she opens her mouth to the last note of the last song is no short of inspirational. From the precision of her screams, to the depth of her growl her presence is felt amongst all in the audience.

The music so fast, moving so quickly…. Michael Amott and his trademark red arm band appear from the corner of my eye and I’m drawn first not by sight, but by the sound of extreme riffs and rhythm emanating from the strings of a brand new Dean Guitar. The floor is vibrating and I can feel the bass through my chest! Michael alternates between backing vocals and lead guitar, Christopher Amott not far behind, his sound and technique are purposefully accurate, the brother combination making the overall effect of the dual guitar team somewhat epic. They play solo’s and duets, a live performance you can’t get on a CD. Again I’m at a loss for words to describe the intensity of this performance. Angela brings the goods again and again and again, from “The Beast of Man”, to “Bridge of Destiny”. A curdling force of rage akin to the sound of a mother giving birth is her scream. The band play superbly, a moment of heightened electricity in the crowd is when “Nemesis” is showcased. “All for one… we are strong… we are one”….

Michael’s musical influence in this band, although commonly known, is blatantly apparent when appearing live. His musical prowess, his attention to detail and passion for his instruments is undying. Keeping everyone together, they take short breaks during songs… but continue to perform at a superior level. As they play I’m trying to write, but can’t… they’re mesmerizing. My gaze is continually drawn back to the spotlight. Even during the lighter of the songs, if you could call them that…or segments of, are epic in their own right. Michael and Christopher’s melodies, accompanied by the softer tones of Angela’s growl are perfectly complementing to Arch Enemies satanic depiction of what is their genre, right down to the gruesome drum solo supplied by Daniel Erlandsson; a guy who knows the metal scene all too well. The combination of classic metal riffs and semi moderns thrash makes me choose words like electrical, empowering, creative, combustive and somewhat elusive! With Michael playing a final solo, guitar head in the air, Arch Enemy are done. If this is a tour to promote an album well done, but in reality, it’s been more of a tour to cement an already thriving career.